Win and they’re in: Looking at Brewers’ playoff hopes

MADISON, Wis. — The Milwaukee Brewers can determine their own destiny Wednesday night against the Cincinnati Reds.

If the Brewers defeat the Reds, they will clinch a spot in the playoffs.

If Milwaukee is victorious, the Chicago Cubs and New York Mets will be eliminated from playoff contention.

Life moves pretty fast. If you don’t stop and look around once in a while, you could miss it.#ThisIsMyCrew pic.twitter.com/uOmF19LNGX

The National League Central is still up for grabs after the Arizona Diamondbacks defeated the St. Louis Cardinals in 19 innings Tuesday night. As of Wednesday, the Brewers are 2.5 games behind the Cardinals.

Milwaukee will play five more games: two against the Reds and three at Colorado.

Here’s what needs to happen in order for the Brewers to clinch the NL Central: 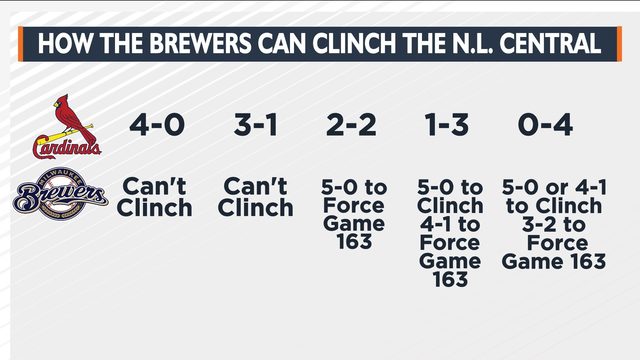 In the wild card race, Milwaukee is one game behind the Washington Nationals.

The wild card team with the most wins will host a one-game playoff.

YOU fuel us. You’re family.
Now get loud because it’s time to #PlayBall.#RiseAsOne | ThisIsMyCrew pic.twitter.com/MFg8mKct8C

If the Brewers and the Nationals are tied, the Brewers would host at Miller Park because Milwaukee won four of the six games against Washington this season.

Man reports seeing someone fire gun outside of car window