MAUSTON, Wis. — A wanted man who was spotted in a playhouse was found by police when they spotted his leg underneath a child’s bed, according to a release from Mauston police.

Officers were called Wednesday to a home on Milwaukee Street where someone had reported seeing a man hiding in a playhouse in the backyard of a residence. Police said they believed the man was 33-year-old Anthony Peterson, who’s wanted on several felony warrants.

When officers arrived, they said they saw someone exit the playhouse. She told police she was Raelynn Bires, 34, of Mauston and that she fell asleep in the playhouse and didn’t know where Peterson was. Officer’s asked Bires if they could search her home to see if Peterson was inside. She gave consent but said she wanted to search it by herself first.

Police said she let the officers inside where they noticed a leg in a pair of blue jeans under a child’s bed with a blanket partially covering it. While the man was slowly coming out from hiding underneath the bed it was confirmed that it was Peterson. He was taken into custody without incident.

While searching the house, officers said they spotted in plain view items on the kitchen counter including a lightbulb hollowed out with a small hole with a white residue inside and a rubber hose attached, a small baggy with a white and crystal substance and a drinking glass with a white and crystal substance in it as well as other drug paraphernalia. Bires said the white substance was a food grade holistic wax used in the burning of incense and the light bulb was used in burning incense as well. 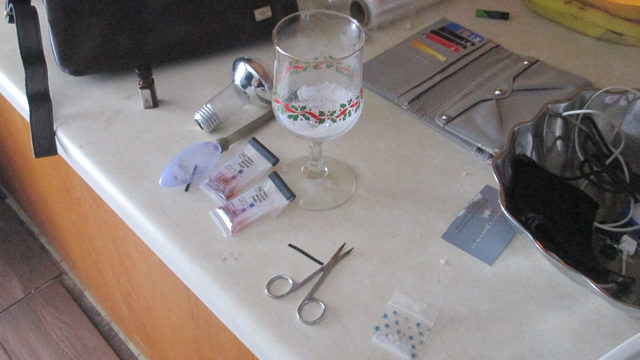 Officers used field test kits and determined that the white and crystal substance tested positive for methamphetamine with a total weight of 1.7 grams.