MADISON, Wis. — Just weeks before the end of the season and the end of the semester, University of Wisconsin-Madison head men’s hockey coach Tony Granato is on his office laptop. Surrounded by hockey sticks signed by the likes of former teammate Wayne Gretzky and photos of his wife and four kids, he’s focused on 500 words.

The paragraphs aren’t about his winning-record Badgers or even hockey. It’s an essay about the elderly and how to help the aging population as Social Security is in greater jeopardy.

“I had been studying to potentially be a teacher when I was here a long time ago, and I think it’s appropriate here being with kids and raising a family of four and now having to coach,” Granato said. “It’s been helpful in a lot of ways.”

BACK AS A BADGER

Granato was an all-American hockey player with the Badgers in the 1980s, part of a family dynasty of athletes who came through that program. He graduated after a traditional four years in school to enter the NHL. He went on to play for Stanley Cup trophies and Olympic gold medals before coaching at the professional level.

Granato lived in six different cities, coaching some of the greatest players in the world.

“I think it was always in the back of my mind that one day I’d like to get back to Madison,” Granato said.

His homecoming didn’t come without requirements. Family was a big reason to return to Wisconsin, and one relative was a non-negotiable. Granato insisted his brother, Don, join him on the coaching staff.

“I think we know each other. We know the program really, really well, and we’re having a lot of fun trying to get it back,” Tony said.

“It’s beyond your alma mater. We truly believe this is the best place to play college hockey for many reasons. To sort of have that opportunity to coach in this specific spot is just awesome,” Don said. “So we’re excited.” 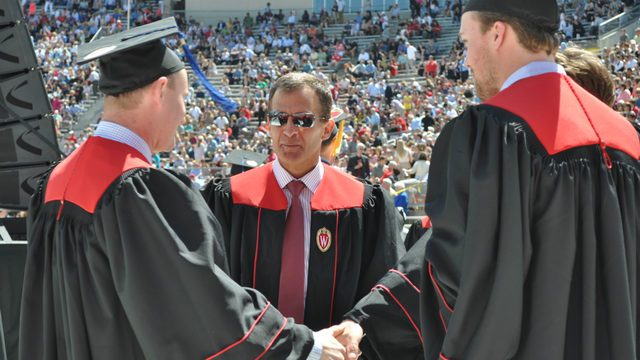 THE TEACHER BECOMES THE STUDENT

The second issue was Coach Granato’s lack of a degree. He told athletic director Barry Alvarez, and they struck a deal: he would go back to school for 12 months and earn his bachelor’s by the end of his first year on the job. He wasted no time, starting with summer classes in 2016 on human and family studies.

He says his status at the university doesn’t earn him any freebies with his professors and he’s OK with that. It takes him longer to get assignments done compared to the 80s, and he admits to over studying for a lot of tests. Still, from his memory, he’s missed only two classes all year. He laid it out there to his team before the start of the season and even ran into a few of them on campus.

“They kind of laughed at it. I told them I’d recommend a few classes for them to take, and they stayed as far away from my classes as they could. They didn’t want the pressure of having to sit next to me in a classroom,” Tony explained.

His final semester was all online, but the coach often had to leave practice early to study or turn in homework assignments, leaving drills in the capable hands of his associate coaches.

“He doesn’t just want to pass. He wants an A,” Don said. “Whatever he does, he does with pride and he does as an ultra-competitive person. So this is no different and it’s consumed him in various moments.”

The freshman coach successfully finished his senior semester, more than 30 years after he started.

“It’s cool, but I should have done it 30 years ago and I could spend a lot more time coaching,” Tony said. 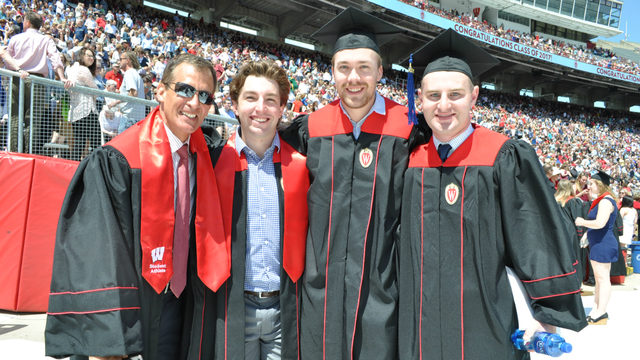 Gabriella Granato fell in love with Colorado in elementary and middle school when her dad was coaching the Avalanche. She remembers applying to a handful of colleges just to be drawn back to the Rockies.

About 19 hours before her dad’s commencement ceremony, she was in her cap and gown. Gabby graduated from the University of Colorado Boulder with a degree in marketing, and Coach Granato made sure he was there to see it.

“It’s a really big accomplishment, but also he wanted to set a really good example for us,” Gabby said. “He’s proud of himself for doing this, and we’re all proud of him too.”

“I’ll have pictures of all four of them with me and their gowns, and then I’ll have one in the middle. That’ll be the big picture when I get this done,” Tony said. “Looking forward to it.”

Friday night, the family was on a plane back to Chicago. They drove back to Madison into the early hours of graduation morning.

Somehow, after all of his accomplishments this year, Coach Granato boasts most about his team and the young men he’s been so happy to lead in his first year back on campus. Don says his brother will be happy to never do an interview on his classes ever again. Tony says he’s most looking forward getting back to full-time coaching, but he has no regrets.

“It’s something that I think is really important and it’s been a fun challenge. It’s been not as easy as I would have hoped in different situations, but I’ve learned a lot and it’s been a nice experience.” 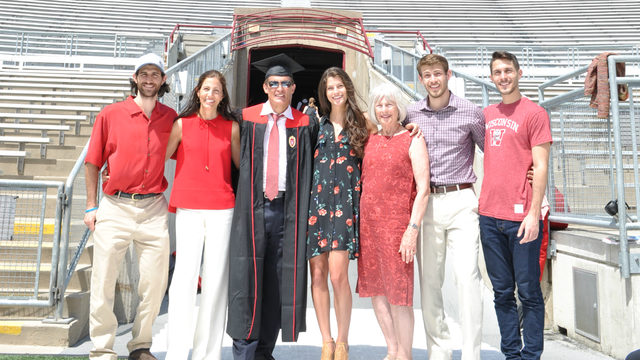