KENOSHA, Wis. — President Donald Trump is promising to find a solution to a trade dispute with Canada that has left dairy farmers in Wisconsin and New York without a market for their product.

Trump said during a speech Tuesday in Kenosha, Wisconsin, that Canada has been “very unfair” to dairy farmers and “we’re going to start working on that.”

Canada has decided to impose import taxes on ultra-filtered milk, a protein liquid concentrate used to make cheese. It had been duty-free but Canada changed course after milk producers there complained.

About 70 dairy producers in both Wisconsin and New York are affected.

Trump promises to work with Wisconsin’s congressional delegation to get a solution.

The governors of Wisconsin and New York sent Trump a letter Tuesday urging him to take action.

President Donald Trump has signed an executive order to tighten the rules for technology companies seeking to bring highly skilled foreign workers to the U.S.

The order directs U.S. agencies to propose rules to prevent immigration fraud and abuse in the program.

Agencies are also being asked to suggest changes so that H-1B visas are granted to the “most-skilled or highest-paid applicants.”

Trump says the order sends a “powerful signal to the world” that the U.S. will defend its workers, protect their jobs and put America first. 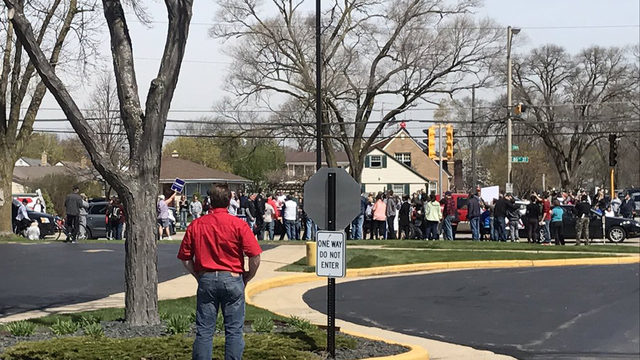 Hundreds of protesters are calling on President Donald Trump to release his tax returns while they wait for the Republican to arrive at a Wisconsin manufacturing company.

The protesters outside Snap-on Inc. in Kenosha held signs on Tuesday criticizing several of Trump’s policies, including his plan to build a wall on the border with Mexico and his proposed travel ban that’s tied up in court.

Retired high school teacher Tom Gilding was among the protesters on Tax Day. He held a sign that read, “What are you afraid of, Donald? Release your taxes,” and helped hold up an inflated chicken made to resemble Trump.

Trump plans to sign an order in Wisconsin to tighten rules on technology companies bringing in highly skilled foreign workers. He narrowly carried Wisconsin in November.