TOWN OF ALBION, Wis. — The town of Albion board chairman expected a full house at a special meeting Tuesday evening regarding the conditional use permit for a proposed gravel pit, and concrete and asphalt plant.

Chairman Robert Venske said nearly 100 people were at the last meeting to discuss the project that would turn about 88 acres of land into a site to mine, crush and wash sand and gravel.

Hoffman Construction Company is requesting the conditional use permit after being awarded the construction contract for the Wisconsin Department of Transportation’s expansion of the north segment of Interstate 39/90 . Hoffman Construction would be widening about 9 miles of the northbound lane from the Rock/Dane County line to East Church Road. The work is scheduled to start in late spring and last through 2020.

The permit application said Eastman Hunting Club currently owns the land, which is mostly open land with some wooded areas used by the hunting club. It’s located on the corner of Hillside Road and Lake Drive and borders the interstate.

Hoffman Construction said the site operations would include mining, crushing and washing sand and gravel; stockpiling processed materials and topsoil/overburden materials; hauling concrete and asphalt and importing pit-run sand and gravel from the mining operations within the site and hauled from another mineral extraction site about 2 miles away . 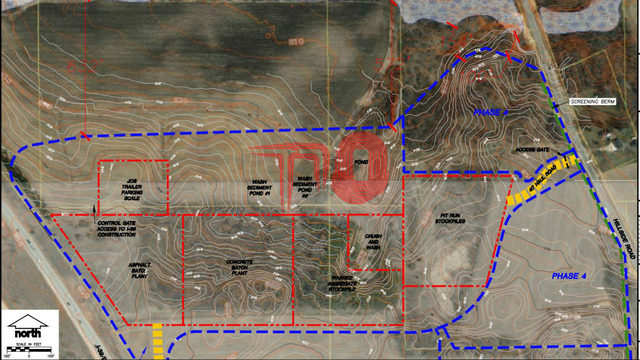 People who live in the area said they were concerned about the number of trucks that would be driving on the town roads.

“The concern is they’re going to be traveling from there to here, to the new roundabouts, going in and going on I-90 that way, which is probably about four or five or even 10 times the amount of traffic that’s going to be there,” Thomas Nolfi said.

He planned to go to the meeting Tuesday night and bring up his concerns.

“The way I would be happy is if they stopped this project all together, put it somewhere else,” Nolfi said. “They’re going to make asphalt there, which is a carcinogen, which is going into the air.”

According to the plan , Hoffman Construction would reclaim the land to agricultural uses at the completion of the project.