MADISON, Wis. — An Illinois sheriff is blasting Wisconsin officials for not picking up a runaway Dane County foster child arrested in Chicago.

Dart said officers found the 17-year-old girl last week in a car with heroin and marijuana. Dart said the girl’s foster mother, the Juvenile Reception Center in Madison and the Dane County Department of Human Services all refused to pick her up when contacted by officers.

“First order of the day is we need to change this protocol. You have to change it. Here was a young woman who was found in a very, very dangerous situation. We didn’t even know she was missing,” he said.

Dart said the teen was not reported missing when officers found her at 11:30 p.m on May 4. Dart called the incident “shocking and disgraceful” in a letter to the governor.

In a reply letter dated Monday, Department of Children and Families secretary Eloise Anderson said the Dane County Department of Human Services “acted properly and in accordance with the Interstate Compact for Juveniles.” Anderson said the officers who found the girl should have contacted Cook County Human Services to begin the process of returning the girl to Dane County, not call the girl’s foster family or the Juvenile Reception Center directly. 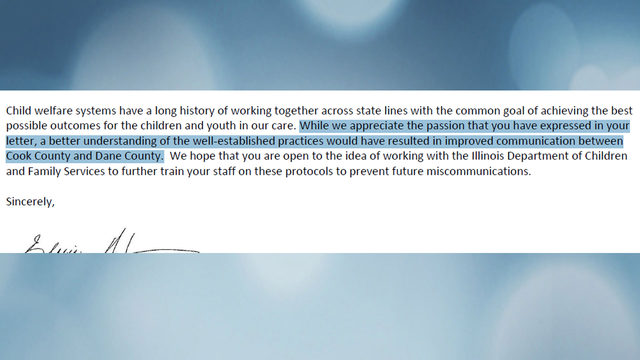 “While we appreciate the passion that you have expressed in your letter, a better understanding of the well-established practices would have resulted in improved communication between Cook County and Dane County,” Anderson wrote.

Anderson said the process for returning a runaway foster child between states has been in place for years through the ICJ agreement.

The Dane County department of human services said under the circumstances, it was unrealistic to expect the teens foster parent to pick her up immediately.

Green said law enforcement in separate jurisdiction should never call someone in Dane County regarding a runaway. Instead, she says the office should have contacted the Illinois department of Children and Families to handle the situation.

“The protocols are set up so children will be safe and law enforcement will have an immediate answer and if he had followed proper protocol we would’ve been no issue,” Green said. “He would’ve immediately gotten a response, they would’ve stepped right in and taken over the planning for the child,” she continued.

The sheriff’s office found a temporary shelter for the teen, but she ran away again. The teen was later returned back to Dane County after getting a ride from a boyfriend, according to Dart. According to Dart, the lack of urgency from Dane county puts runaway teens at risk.

“You have to move with a real sense of urgency or else bad things are going to happen and the notion that some bureaucratic compact is going to cover this because that’s how life should work is beyond naïve,” he said.

Green said the department has had a long standing relationship with the Illinois Children and Family services and have never had this kind of problem.