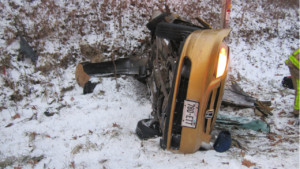 DODGEVILLE, Wis. — A Spring Green woman died in a crash involving a car and snowplow truck on New Year’s Eve.

According to a news release from the Iowa County Sheriff’s Office, the crash happened at County Road C west of Highway 23 at about 7:33 a.m.

Officials said Kathryn M. Dejak, 76, of Spring Green, was driving west on County Road C when she lost control of her vehicle.

The release said her car hit an oncoming snowplow truck, and the passenger side of her car struck the plow portion of the truck. Deputies said the car slid into a ditch and overturned onto its side.

Officials said everyone involved in the crash had been wearing seat belts.

Authorities said the recent snowfall led to icy road conditions and was a factor in the crash.