Camila J. Perez, 26, of Madison, is facing charges of theft and felony unauthorized use of a debit card in connection with purchases that she’s accused of making over a four-month period last year.

According to a criminal complaint filed Tuesday, Perez was working as an administrative clerk for early and extended learning for the Madison Metropolitan School District. Perez was responsible for holding more than 20 summer school session cards.

The complaint said debit card records on two cards supplied for the 2016 summer session had multiple fraudulent charges spanning from June 8 to Oct. 5 at Staples in Madison, Monona, Janesville and at Target in Madison. The school district also audited Perez’s emails and found two receipts emailed to her from the Staples in Janesville and Monona. Items purchased with the two MMSD cards were personal items, including gift cards, hair products, luggage and shoes. 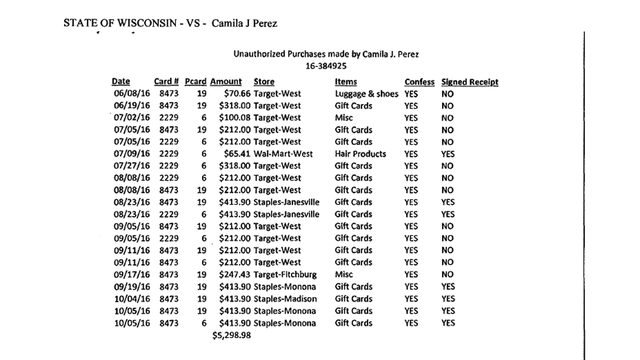 Police said the total amount of fraudulent charges on the two cards was $5,298.98, according to the complaint.

Perez is charged with one count of theft by false representation between $5,000 and $10,000, and four counts of identity theft by unauthorized use of an entity’s identifying information or documents.

According to the complaint, part of Perez’s job was tracking and accounting the summer charge cards for MMSD schools.