For a uniquely ambitious father-son bonding project, Steven and Ben Nadler pooled their talents. The duo with Madison roots wrote and illustrated, respectively, a history of 17th-century philosophy. “Heretics! The Wondrous (and Dangerous) Beginnings of Modern Philosophy”–published in graphic novel form–melds the extensive scholarship of Steven, the elder Nadler, and the younger Nadler’s whimsical visual style.

The book is an engaging introduction to how Western philosophers in the 1600s–including Galileo Galilei, Francis Bacon, Rene Descartes, Baruch Spinoza, Sir Isaac Newton and 11 others–challenged medieval thinking and came into conflict with the Catholic Church amid the scientific revolution.

Far from being a dry, academic treatise, the 183-page “Heretics!” has fun with the developing schools of controversial thought by showing “the philosophers either meeting each other or corresponding with each other,” Steven says. This narrative flow allows the writer and illustrator to play off each other to get across to readers big, often nebulous concepts.

Steven, a University of Wisconsin-Madison philosophy professor since 1988, and Ben, a Madison native and 2013 graduate of the Rhode Island School of Design, pitched the book idea to Princeton University Press, which published three of Steven’s 15 previous books (six of which he edited or co-edited) on important philosophers–including Descartes and Spinoza. One of his books, “Rembrandt’s Jews,” was a finalist for a Pulitzer Prize in 2004.

Ben concedes that his father “threw me a bone because I was just out of college and broke.” Ben also admits, “I was only superficially aware of what [my father] did. I still haven’t read any of his other books, actually. I don’t know if I should admit that. Doing ‘Heretics!’ was like a crash course in my dad’s expertise.” 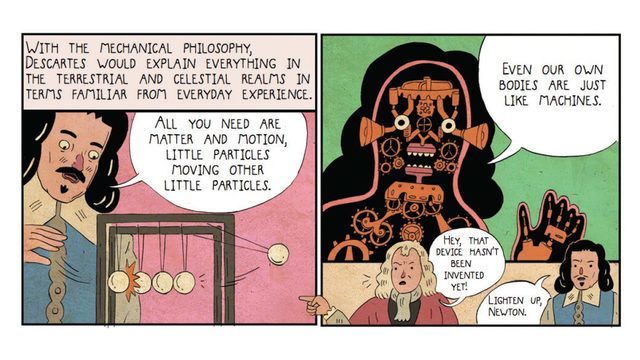 Due to the critical acclaim “Heretics!” has received, Ben, who lives in Chicago, is already hard at work on a graphic novel about the trial and death of the ancient Greek philosopher Socrates. It will be written by Debra Nails, a philosophy professor at Michigan State University.

Before “Heretics!,” Ben, under the title “Sonder,” self-published collections of his own comics. He hawks copies of those and “Heretics!” at comic book conventions, including the Chicago Alternative Comics Expo.

The quality of the end product has been gratifying, the Nadlers say. While Steven argues he wrote most of his previous books for “a broader audience, not just philosophy specialists,” the initial positive reception “Heretics!” has received “has been huge,” he says. “My Spinoza biography (‘Spinoza: A Life,’ published in 1999) got a lot of attention, but it was nothing like this.”

The Atlantic magazine excerpted 10 pages of the book. Feature stories about the book have appeared in newspapers in the Netherlands, Israel and elsewhere. And five foreign-language translations are in the works, Steven says.

“It’s gotten generally good reviews, except every once in a while someone will complain that either you have to know the philosophy already to understand it or it’s overly simplistic and silly. So if we’re getting complaints from both sides, we must have hit the mean,” he says.