Reality Check: What it means that lawmakers pulled policy out of budget

MADISON, Wis. — You may have heard recently that lawmakers pulled a number of items from the state budget as they begin their work. Wondering what that means?

Every time a governor proposes a state budget, they put in things that don’t have a price tag but change state policy. It’s controversial, and lawmakers debate whether those items should stay or go.

At least this time, they’ll go. Joint Finance Committee leaders announced they’ll remove all 83 policy items Gov. Scott Walker proposed as they begin work on the 2017-19 state budget. Those include policies he proposed like eliminating the minimum number of instruction hours for schools, requiring University of Wisconsin students to have an internship to graduate or allowing them to opt out of paying segregated fees, and repealing the prevailing wage on public construction projects.

Has all this happened before? It sure has.

A look back to the 2001 budget shows then-Gov.Tommy Thompson proposed 189 policy items and the budget-writing committee removed 152.

2003 is the last time all policy items were removed. That year, Democratic Gov. Jim Doyle proposed the budget and Republicans controlled the Legislature. 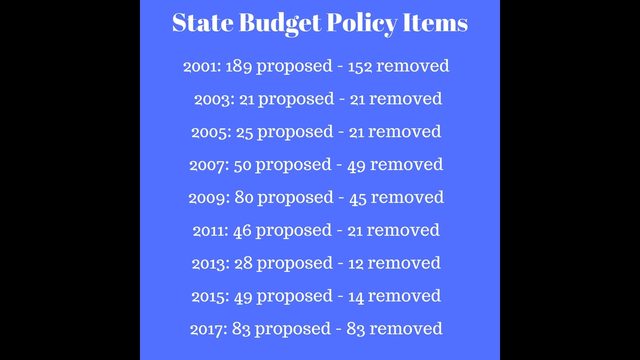 A look through the following years shows that Doyle and Walker consistently proposed policy items, and sometimes the Finance Committee removed most of them, or sometimes far fewer.

Why does all this matter? These are substantial changes at the outset of budget deliberations and draw lines over where lawmakers are at on these issues. But in the end, these issues may not be dead. They can be reintroduced as a later budget amendment or they could be proposed as separate legislation.

The committee also decided to work off the “base budget” for transportation. That’s Capitol jargon meaning they’ll start from scratch on that issue, working from current budget numbers and then deciding whether to add back pieces of the governor’s plan or come up with one entirely their own.