MADISON, Wis. — The major winter storm that pounded the West Coast over Thanksgiving and the northern Midwest over the end of the holiday weekend is sweeping through New England through Tuesday.

In its wake, there is a foot or more of snow on the ground over the northern third of Wisconsin, and at least several inches of snow cover north of Wisconsin Dells.

Since southern Wisconsin missed out on most of the accumulating snowfall, the ground can absorb a little more energy from the sunshine that is predicted for most of the week. That will keep temperatures over southern Wisconsin higher than the rest of the state, resulting in slightly above-normal temperatures through the rest of the week into the weekend. The only exception to this will be after the passage of a cold front Thursday night that might bring a few flurries on Thursday night and high temperatures in the lower 30s on Friday.

For the weekend, high temperatures will be back in the upper 30s on Saturday and should climb to the middle 40s on Sunday ahead of an approaching weather system and cold front. Any showers will change to flurries later on Sunday night as the cold front moves through Wisconsin. Next Monday will be windy and colder with high temperatures in the lower 30s early in the day before falling into the 20s in the afternoon. Some light snow is expected, but right now it looks as though any snow accumulations will be minor. 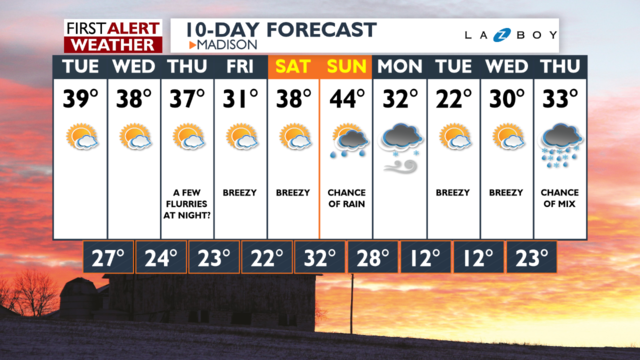 Stay tuned to News 3 Now newscasts, Channel3000.com on the internet, and the Channel 3000 First Alert Weather and Traffic App for further weather updates.

Crime required for impeachment? Not so, say legal experts

DNR board to gauge reaction to deer hunt changes

Where you can get Jelly Belly Sparkling Water