MIDDLETON, Wis. — The images tell a story of a 35-year-old husband and father’s eight-month journey with colon cancer. The 200 black and white photos were taken by his wife, a professional photographer.

The very first photo was taken on the day Alan Natachu was diagnosed. It shows him waiting for the doctor to come in and talk with him. His 2-year-old daughter, Astraea is sitting on his lap.

“I knew at that point the news was not going to be great,” says Amanda Lynn Jones, Alan’s wife. “But I wanted to save, if that was the last normal moment that we had, then I wanted to save it.” 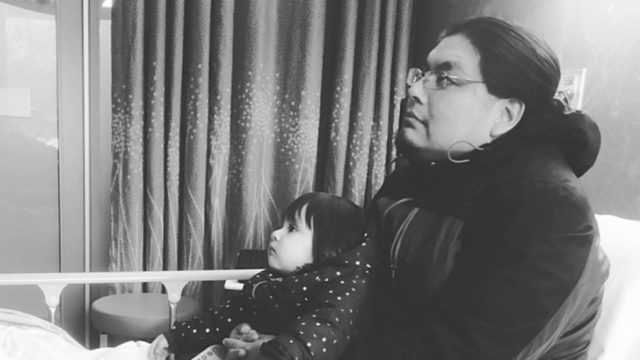 What came next were surgery, radiation and chemotherapy treatments. What came with them was hundreds of photo taken by his wife.

The photos capture the struggles of dealing with everything it takes to save a life from cancer. But the photos also show what it takes to get through it, the support of family.

It was those images of her husband being comforted by Astgraea and their 12-year-old son, Dmitri that gave a mother and wife strength.

“With everything that cancer took, we were told really early on, by a friend of my moms, to look for the gifts,” says Jones.

Jones used social media to share their story. She posted the photos to Instagram and quickly learned they were not alone in their journey.

“Then I realized there was a whole community of people and that’s what kept it going. There was a community of young survivors and spouses,” says Jones.

Eight months removed from the photo of a father waiting for bad news with his daughter in his lap there came another photo. This one shows that father walking out of the oncology department at UW’s Carbone Cancer Center following his final treatment.

“That was one that I really wanted to capture of me walking out the door,” says Natachu.

The family hopes when people see the collection of images, it helps to raise awareness for colon cancer, especially for young people.

“I hope they see that it is not a pleasant experience, but it is going to be something that they can get through,” says Natachu.