The rally was hosted by several activist organizations in the Madison area, led by the Party for Socialism and Liberation.

Speakers at the event said, while relations between Iran and the U.S. have seemed to settle, the U.S. is still engaging in economic warfare with Iran.

“It’s easy to see violence as being bombs and bullets but its harder to see it as people being unable to get certain kinds of food or medicine they need and that’s what the U.S. sanctions do,” said PSL representative Sawyer Johnson.

“It’s always the poor in our country and in any country that suffer and have no justice,” she added. “War doesn’t produce justice it produces sorrow, and so that’s why we are here for this.”

About 50 people attended the rally, including Thomas Scheevel who said,”It just important to show that there’s not passive acceptance of war.”

Organizers at this event also expressed their opposition to the F-35 jets expected to make their way into Madison this spring.

This is the second “No War on Iran” protest held in Madison this month.

Earlier this month, a U.S. drone strike killed top Iranian general Qassem Soleimani which led to an Iranian attack on U.S. Troops at an Iraqi air base.

Current U.S. sanctions on Iran are the latest development in the ongoing tension between the two nations. 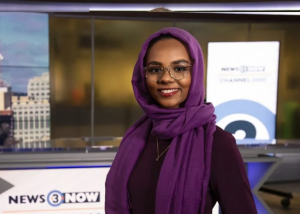 Tahleel Mohieldin is a general assignment reporter for WISC-TV News 3 Now and Channel3000.com. She can be contacted at tmohieldin@wisctv.com.