When seniors finished classes on March 13, they had no idea it would be their last time stepping foot into their classrooms before graduating high school.

A week ahead of the district’s spring break, Public Health Madison & Dane County advised all schools in the county to close immediately to curb the spread of the coronavirus. When the announcement went out on March 15, 2020, everything changed for 5,330 staff members, 27,000 students and their families in the Madison Metropolitan School District.

In the weeks that followed, school districts across the country were tasked with radically rethinking curriculum and programming. “Everything had to change,” says MMSD Interim Superintendent Jane Belmore. “It’s really hard in an organization like a school district where you depend on information and communication to really try to ramp up these new ways of working.”

But by April 6, the school district had plans in place to begin remote learning. It was at that point that the realities of what the rest of the school year would look like began to sink in for many students — seniors, especially.

There would be no senior prom. No final concert or championship game. No senior nights, spirit week, awards reception or senior prank. And after the school district made a formal announcement on May 6 regarding a virtual graduation, it became clear that graduating seniors would not be walking across a stage to receive their diplomas.

“Not having that celebration … it hurts so much,” says Facundo Ortiz-Santana, a 2020 Robert M. La Follette High School graduate.

Ortiz-Santana began high school not knowing English, having just moved with his family from Uruguay to the United States. His four years of high school helped him learn the English language, and he was prepared to proudly wear his cap and gown to the Kohl Center and move his tassel as a first-generation graduate.

Cristian Cruz-Montes De Oca of Madison West High School also became the first in his family to graduate. “A lot of us graduating are first-generation students — born to immigrant parents whose main purpose of coming to this country was to give us a better future,” he says. “It’s more than a celebration. It’s about being able to feel accomplished. And also just for me, [it was about] having my parents see me walk across that stage, like, ‘Yes, I did it.’”

And it’s not just a graduation ceremony these students are missing out on, says West High School Assistant Principal Mitch McGrath. “It’s all the gradual closure that the end of the year provides. Their last time in a class. Their last time taking an exam at West,” he says. “All those things give them a chance to process just that little piece … that makes graduation a little bit easier in terms of closure and a little more celebratory because you’ve had that opportunity to say goodbye to all of those things.”

But it didn’t take long for students like Ortiz-Santana and Cruz-Montes De Oca to come to terms with the disappointing circumstances.

“It’s important to acknowledge that yes, we’re missing out on a lot, but not get caught up in it,” says Cruz-Montes De Oca. “There’s a lot more happening out there. We need to look beyond ourselves and what we’re going through.”

Nivedita Remji of James Madison Memorial High School says she understands that the decision was made to keep people safe, and found her own silver lining — “The time I get with my family now is something I feel like I won’t get back later,” she says. “So I’m glad I have that.”

Displays of maturity such as this have resulted in the frequent characterization of the class of 2020 as a resilient, adaptable, grateful group of young adults. “‘Pivot’ has become a very oft-used word in the last couple of months,” says Melinda Heinritz, executive director of the Foundation for Madison’s Public Schools. “It’s certainly thrown them a curveball very early in their young adult lives. If they can manage and navigate this, they’re going to be well equipped for what life has to bring them over the next few decades.”

The life of a 2020 graduate started in the wake of 9/11, and the start of their young adult lives has been marked by an unprecedented global pandemic as well as the world’s largest civil rights movement to date following the death of George Floyd.

“The class of 2020 was born to make history,” says James Madison Memorial High Principal Matt Hendrickson in his opening remarks for a virtual graduation ceremony like none before it.

“What are some ways that we can celebrate our kids?” Michael Hernandez asked himself when he knew in-person graduation ceremonies would not happen while COVID-19 continued to spread. As chief of high schools, Hernandez says he approached it as if it were his own child graduating. “I wanted to make sure that we could do anything and everything possible to make it a special event,” he says.

Fanfare was achieved in small ways even ahead of the school year’s end through lawn signs, photoshoots, billboards, car parades, parking lot parties and more. But when it came to deciding what graduation would look like, Hernandez found an answer after talking to Neil Heinen, editorial director of WISC-TV and Madison Magazine, and Tom Keeler, vice president and general manager of the media outlets’ parent company, Morgan Murphy Media – Madison.

A plan took shape for a virtual graduation to be aired on News 3 Now and streamed on Channel3000.com, as well as a MMSD graduation special edition of Madison Magazine. “This is an unprecedented pandemic, but this is also an unprecedented celebration and collaboration between two entities to celebrate our kids,” Hernandez says.

Keeler noted that the partnership fit Morgan Murphy Media’s mission perfectly. “There’s really no better way for us to honor the class of 2020 by combining all of our resources to make this graduation ceremony something these kids will remember for the rest of their lives,” Keeler says. “We just feel it’s incumbent on us as News 3 Now, Channel3000 and Madison Magazine to tell these stories and showcase the accomplishments of these kids during these challenging times so that they feel a sense of accomplishment upon this rite of passage.”

Speeches were recorded, photos were collected, choir and band performances were stitched together, weekend hours were logged and six ceremonies went live in prime time on News 3 Now on June 12 and 13.

“[We] spent so much time on this project, we feel we know each of the 1,900-plus seniors in the MMSD system,” says News 3 Now executive producer Steve Koehn. “It was a grand adventure that left us with such a great impression of the talent and dedication of students, teachers and staff in the district.”

The first MMSD school on the screen was Madison East High School. Principal Brendan Kearney appeared behind a podium addressing a mostly empty Margaret Williams Theater to welcome viewers to an “extraordinary graduation ceremony.” His words of wisdom were underscored by the events and life lessons his graduating students had already experienced in their young lives, as well as what’s to come.

“You will become the leaders that we really need — more compassionate, more willing to take responsibility for the health of our planet and its people,” he said in his opening remarks. “More able to celebrate the differences among us, including race, language, ability, country of origin and identity. More willing to question the status quo and dismantle systems of inequity. More able to adapt yourselves to the changes in the world around you, just as you are right now in so many ways.”

Malcom Shabazz City High Principal Mary Jankovich asked her graduates to “never forget how you got here today. … Go forth, take your place, especially during these uncertain times. The world needs you. … You were born to make history. It’s your moment. Bask in the limelight.”

In James Madison Memorial’s keynote address, social studies teacher Robin Staley pointed out that she had to get creative to cope with her stage fright due to the nature of the speech. “People who are nervous about addressing a live audience are told to look out and imagine that the listeners are in their underwear,” she said. “The irony is that some of you watching at home probably are in your underwear.” She continued her speech with wisdom for students to not yearn to get “back to normal,” but to “set a standard of justice and compassion in the world around us.”

La Follette Assistant Principal Cherie Thibodeaux introduced keynote speaker Andrew Bentley, a distinguished alumnus who spoke of his time at La Follette and the successes and failures that followed, and assured graduates who were watching that their accomplishment of graduating isn’t weakened by the unusual ending. “There is an asterisk next to the class of 2020, but it marks your bravery in navigating the desperation that surrounds you while somehow you’ve finished your school work,” he said. “Stand proudly while wearing your cap and gown and mask.”

To begin Capital High School’s graduation ceremony, principal Karyn Stocks Glover noted the school’s effort to uplift black excellence to enhance the lives of students and the greater Madison community. “To the families watching tonight, I invite you to be filled with pride and joy for your children,” she said. “To our graduates, I want you to know that we have seen the greatness in you.”

Madison West Principal Karen Boran reminded students that the circumstances can shape their futures. “You have a unique opportunity to show us that you know how to rise up above personal loss of important senior rituals to use what you have experienced and what you have learned to help ensure that the future in which we all live will be informed by what you already know and believe,” she said. “We are asking you to use your voice. We’re asking all West students and families to use their voices, because otherwise we cannot ensure that the integrity and equity of our teaching and learning and the inclusion of our climate and culture can occur without your voice. We need your voice.”

While not in person, MMSD’s 2020 graduates were ceremoniously celebrated. Many moved their tassels, hugged their family members and marked a milestone moment — all from home.

“I’m hoping this is something that they remember for years,” Hernandez says.

Click here to return to the MMSD Graduation Special Edition homepage for more content and a virtual version of the magazine this story appeared in. 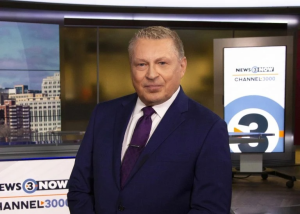 Mark Koehn is the anchor for News 3 Now at Noon and News 3 Now Live at Four. He can be contacted at mkoehn@wisctv.com.