MADISON, Wis. — A new bandage developed by a team of researchers at the University of Wisconsin-Madison could change the game for the medical field. In rodent tests, the bandage cut the healing time of a wound that would normally take two weeks to heal down to just three days.

“We were surprised to see such a fast recovery rate,” said Xudong Wang, a professor of materials science and engineering at UW Madison. “We suspected that the devices would produce some effect, but the magnitude was much more than we expected.”

The bandage uses energy produced by the body and transforms it into electric pulses, which are delivered to the injury site. According to a press release, researchers have known for decades that electricity can help speed up the process of recovery time for wounds. Most technologies that use this method currently are found in large, bulky equipment and send off powerful jolts of energy that could harm human tissue.

According to student and research member Yin Long, these bandages “have limited charges, and they are gentle, mild electric pulses, so they will not harm human bodies.” 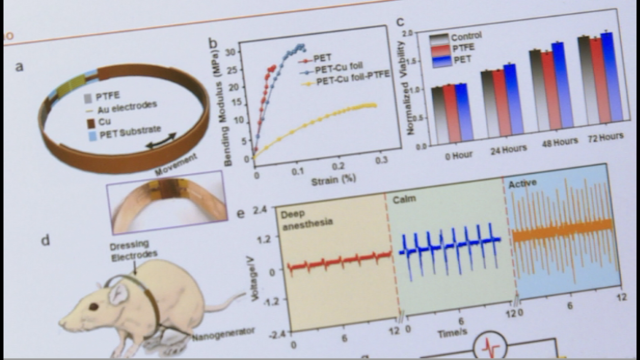 The bandages are linked to an energy-harvesting unit called a nanogenerator, which would be worn around the user’s torso. The natural motion of the torso expanding and contracting creates energy that’s transferred to the nanogenerator, which delivers low-intensity electric pulses.

The bandages have only been tested on rats so far, meaning the size of the injury these bandages can heal is about one square centimeter. The researchers plan to test it on pigs next as their skin closely mimics human tissue, which would also allow them to expand the size of the wounds they can test.

While the bandages are not available for purchase in stores, the researchers say the technology is so simple and the materials used are so cheap that they wouldn’t cost much more than a regular box of Band-Aids when they do become available.

The developments to come excite the team as they continue their research and experimentation.

“We are excited about it, because our group is focused on nanogenerators, and we always want to do something to make life better,” said Long.