Kierce makes sure to have several vegan items

Jason Kierce, executive chef at Adamah Neighborhood Table, isn’t a vegan but he does have a special place in his heart for the people who choose to follow a plant-based diet.

“I don’t know why I have this yearning to fight for vegans,” Kierce says. “Maybe I admire it? I think it would be quite difficult.”

At his kosher-certified, deli-focused restaurant in the UW Hillel center on campus, Kierce always makes sure to have several vegan items on the menu and many others, including the Shakshuka, a rustic dish made by poaching eggs in tomato sauce, which can be easily modified to be vegan. Kierce’s vegan version substitutes a tofu “egg” instead.

“There are 22 items on the menu that are vegan,” Kierce says. 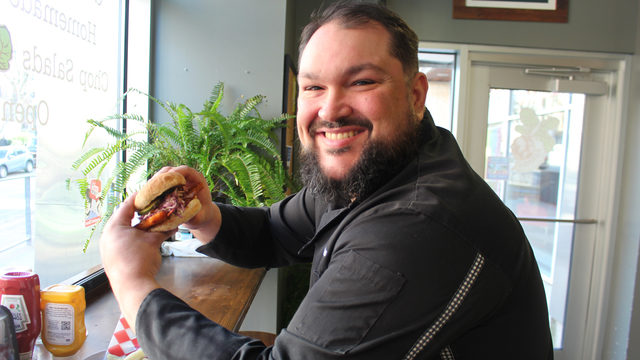 A new vegan item that Kierce added this fall has recently been getting a lot of attention. “The Nashville chicken is the thing now,” Kierce says.

Originally from Alabama, Kierce is quite familiar with fried chicken, but the idea of developing a vegan version of the popular sandwich didn’t occur to him until it was requested.

“I really enjoy serving food at the Madison Vegan Fest,” Kierce says. “We did it the first year, and I was under the assumption that vegans were more health focused … I figured it was a healthier audience.”

Kierce decided to serve a “fancy bruschetta” with smashed peas, jalapeños and truffled mushrooms. “We did okay,” Kierce says. “But I see the donut person has a huge line and so does the person with the fake macaroni and cheese. I was like, ‘I missed the curve on this one.'”

This year Kierce decided to ask for help. “I asked the moderator for the vegan fest Facebook page if I could put a poll up and find out what they wanted to eat,” Kierce says. “Someone requested the Nashville chicken sandwich and a whole bunch of people started ‘click, click, click.’ I thought ‘I’m going to do this. If the people want it, I’m going to bring it to them.'” 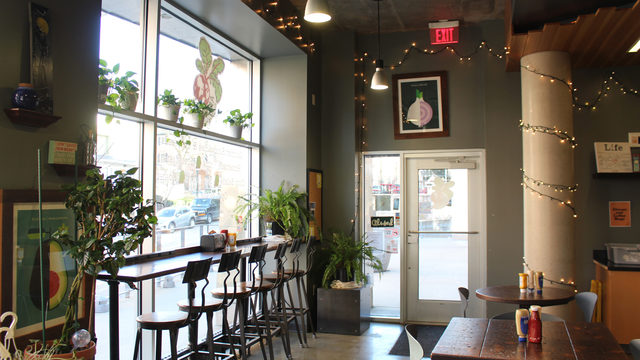 The original Nashville-style hot chicken sandwich involves coating chicken in spices and dredging it in buttermilk before frying it and topping it with pickles and mayo-based coleslaw; in other words, Kierce had some work to do. Originally planning on making his own seitan, a meat substitute made with wheat gluten, Kierce then remembered a product that he had bought for Passover.

“I had bought these cutlets so I had something that I could serve to vegetarians and vegans,” Kierce says. “All the vegans came to me and said ‘this the best meat substitute I’ve had.'” After settling on using the soy protein cutlets, Kierce then developed his own Nashville sauce that he adds while sauteing the “chicken.” The coleslaw is made by mixing purple cabbage with a vegan mayonnaise that they make in-house at Adamah.

The sandwich is then topped with bread and butter pickles — also made in-house — and comes served on a vegan roll from S. Rosen’s. “We had lines at Vegan Fest throughout the entire day,” Kierce says with a big grin. After the success of the sandwich at the food festival in August, Kierce decided to add it to the regular menu this fall. “It’s one of our bestsellers,” Kierce says. “It outsells a lot of our meat dishes.”

Note: Adamah is open while school at UW-Madison is in session, the restaurant will be closing for winter break on Friday, December 20 and reopening on Tuesday, January 21.