Dave Weinbach is building the game in Wisconsin

When Madison financial planner Dave Weinbach visited his parents near Phoenix during the winter holiday break in 2007, he did what he’d done since he was 4 years old growing up in Fox Point until he graduated from Nicolet High School in Glendale, outside of Milwaukee. He played tennis with his mom and dad.

There was one difference. From several of the adjacent courts at the Sun City Grand Club in Surprise, Arizona, an unusual sound – pop, pop, pop – echoed, as paddles sent a whiffle-like ball back and forth across the net.

“For a tennis player, it was a little interrupting,” Weinbach says.

It turned out they were playing a game called pickleball. “I’d never heard of it,” Weinbach recalls. But later that day, some of the pickleball players asked Weinbach to fill a doubles game.

“You don’t want me,” Weinbach responded. “I can’t even spell ‘pickleball.’ ”

The pickleball players included some of the best in the country. Seeing Weinbach with a tennis racket, they sensed his talent and recognized a mentoring opportunity.

Weinbach came to embrace the new game, which combines elements of tennis, badminton and table tennis. “I fell in love with it,” he says. His wife, Dina, and three sons did, too. “I think I played four or five hours a day for the rest of the vacation.”

Five years later, again in Arizona – the only place Weinbach played pickleball – a woman named Stephanie Lane, vacationing with her family from Nashville, Tennessee, saw him play and suggested they might do well in mixed doubles tournaments together.

Weinbach didn’t jump into competition immediately, but when he did play with Lane and others as his partners, he was a pickleball sensation.

“He got famous quick,” Lane says. “He kind of soared.”

Today, Dave “The Badger” Weinbach, 50, is one of the best-known personalities in the booming sport of pickleball. He has more than 100 gold medals for winning tournaments, including multiple victories in the sport’s biggest events – the USA Pickleball Association Nationals and the Minto U.S. Open.

Weinbach talks about “spreading the pickleball love” and is a grand ambassador for the game, having led more than 300 clinics in 22 states (he has plans to do several internationally next year), all while living and working in Madison. His firm, Weinbach Investment Management LLC, oversees $135 million in assets. 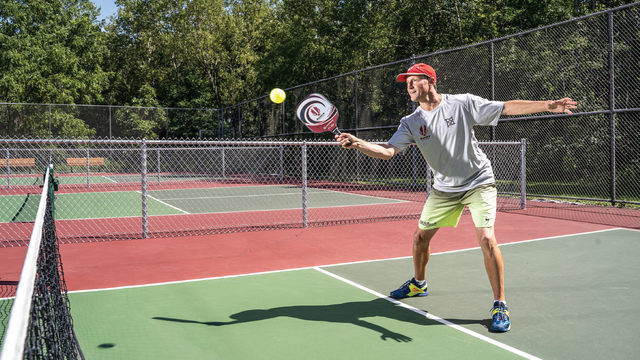 In hindsight, it can almost seem like Weinbach was destined to be a pickleball star. It’s a social game — players are in closer proximity than in tennis – and Weinbach calls himself a “people person.” The camaraderie the game engenders draws Weinbach to about 20 tournaments a year.

Both of his parents were passionate about racket sports and passed it down. Weinbach was invited to the first U.S. Olympic Training Center for table tennis as a teenager and just missed making the team.

What Weinbach didn’t want to do after graduating (from the University of Wisconsin-Madison with a mathematics degree and a minor in business and finance) was actuarial work. He did like numbers but missed interacting with people. Investment advising offered both, and he did that for more than 25 years.

It allows him the flexibility for pickleball, as does his family’s love of the sport. No surprise: The Weinbachs have a pickleball court outside their home.

Weinbach was part of a small group that worked with and raised money for the Madison Parks Division to open in September 2016 Madison’s first dedicated pickleball complex: six courts in Garner Park.

Surrounding communities have followed suit, part of a trend that reflects the rapid growth of the game both nationally and around the world. In late July, NBC’s “Today” show aired a segment on pickleball in which Al Roker referred to the game’s “soaring” popularity. National championships have been televised on ESPN and the CBS Sports Network.

Numbers can be hard to track, but Weinbach says there were about 7 million pickleball players in the U.S. as of summer 2019. He predicts that figure will increase to 10 million by the end of 2020. That would be a significant milestone, Weinbach notes, because 10 million participants is the threshold where equipment and apparel giants like Nike and Under Armour get in the game.

In December, Weinbach will take a significant step hosting for the first time his own pickleball event – ”The Dave Weinbach Sharing the Pickleball Love Tournament.” It’s Dec. 13-15 at the Sun City Grand Pickleball Club in Surprise, Arizona – the place where Weinbach first encountered and learned the game.

He has hopes of doing a similar event in Madison, where the Capital Area Pickleball Association has gained traction.

Beyond that, his dream is to open a Dave Weinbach Pickleball Academy in the Madison area, where he can teach and pursue his goal of getting more young people into the sport. For this pied piper of pickleball, it’s all about sharing the love.

Doug Moe is a Madison writer and a former editor of Madison Magazine. Read his weekly blog, “Doug Moe’s Madison,” on madisonmagazine.com.