Rhodes-Conway pointed out the need to decrease rent costs and increase reliable transit options. Specifically, she highlighted full funding for the first phase of a Bus Rapid Transit system in her capital budget. That system will use dedicated lanes, larger buses and more modern stations to reduce ride times. Rhodes-Conway’s plan also funds renovations at the Madison Metro headquarters, upgrades at the bus barn and investments in new storage facilities.

“We can’t turn the isthmus into a superhighway, so we need transportation options that don’t rely on the automobile,” Rhodes-Conway said. “So we need to build on our success as a transit city and grow a more modern transit system that is regional, fast and reliable.”

“It is our goal to increase the city’s energy generated by renewable sources by 33% in 2020,” Rhodes-Conway said.

Rhodes-Conway’s proposal fully funds the construction of the public market on the city’s near east side as planned. That said, the mayor plans to transfer the $7.5 million the city is responsible for covering to TIF district funding. That money will go toward the Bus Rapid Transit system, affordable housing efforts and the new Land Banking Fund. Rhodes-Conway is also calling on the Public Market Foundation to raise another $500,000 for the project. 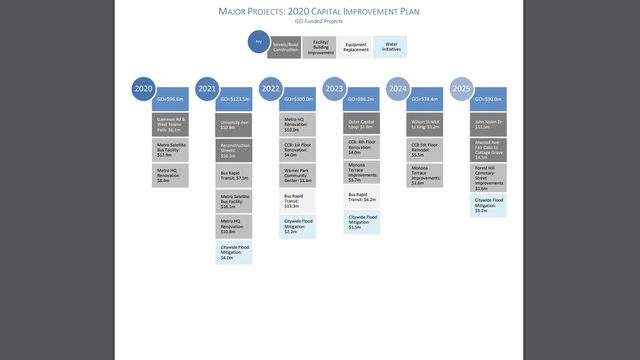 Overall, Rhodes-Conway says the debt service projection under her proposal is $116 million lower than the current capital improvement plan.

For a more detailed summary of the executive capital budget, visit the city of Madison’s website.