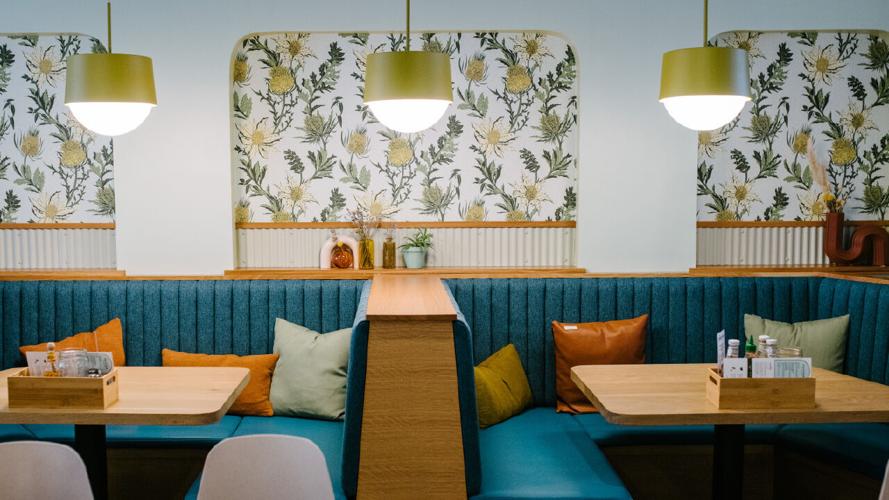 booths in a coffee shop with wallpaper 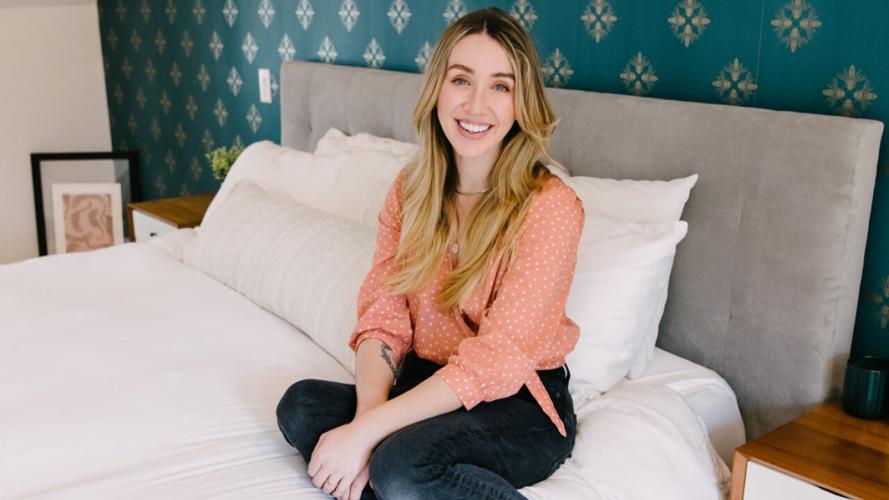 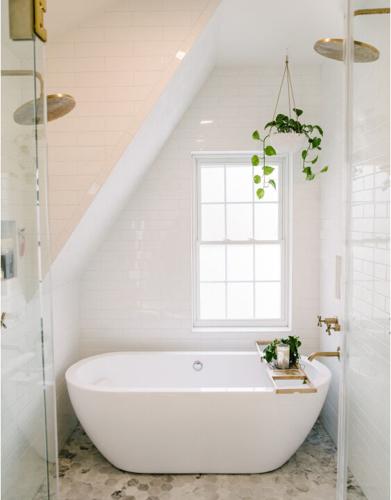 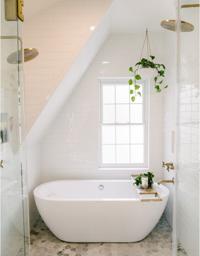 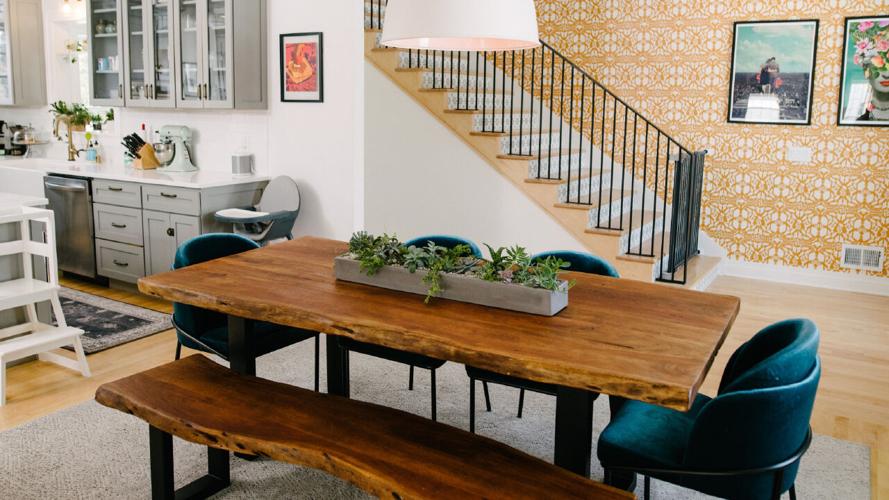 For Tori Gerding, an ideal space is clean and modern, but with a welcoming, lived-in vibe.

It’s a mix she’s perfected, both in her Maple Bluff home and her three Ancora coffee shops. Her design combines backdrops of white and neutral tones along with light wood, subway tile, streamlined but comfy furniture, lots of plants and — her signature — pops of wallpaper.

“It’s no secret among friends and my customers that I love wallpaper,” Gerding says. “I just think it’s a fun way to add color, pattern and depth to a space, and it is definitely a conversation starter. It is the first thing I choose when I start designing a new cafe, and from there we can pull colors and corresponding textures and patterns.”

Gerding began doing marketing and bookkeeping for Ancora when she first moved to Madison after college. In 2013, she bought the cafes (one on King Street, one on University Avenue, both of which have since been relocated on the same streets) from the owners, who were retiring. Slowly, she refreshed the brand and coffee shops.

The University Avenue was the first to get a makeover. Second was the King Street outpost, just a few doors down from the Majestic Theatre, which her husband, Matt, opened in 2007. And most recently, she opened a North Sherman Avenue location in the former Manna Bakery & Cafe. That latest shop’s sage green walls, white oak tables, sleek white chairs, abundance of plants and accents of botanical wallpaper came together to create what Gerding considers the truest representation of the vision she had for her cafes.

And it’s similar to the aesthetic she’s honed at home.

Charm and good bones attracted the Gerdings to their house, but when they bought it in 2016, they knew they’d want to make some changes. The kitchen and powder room were turned into spaces that respect the history of the home — which was built in 1924 — while suiting their modern tastes.

The kitchen now features white quartz countertops, a white subway tile backsplash and gray cabinetry with some glass fronts and handles that Gerding sourced from Etsy, opting for an oil-rubbed bronze finish that’s less shiny than traditional brass. Highlights of the small bathroom are a white penny tile floor and a floating wood vanity with a sleek white sink.

Renovations slowed when their daughter Evie, now 4, was born. But when Gerding was three months pregnant with Rhea, who’s now 2, the desire for more improvements kicked in. So she reached out to Aro Eberle Architects and Carlson Construction, both of which had helped with Ancora revamps.

“We basically gutted everything but the kitchen,” she says.

Fortunately, the extensive construction wrapped just before the pandemic hit, providing the family a fresh and comfortable space for spending so much time at home.

Tearing down a detached garage allowed the Gerdings to build an addition to the side of the house, and relocating the main staircase there dramatically opened up the living room. Now that airy living space opens into the dining room and kitchen, creating a true heart of the home.

Behind a tan leather sofa, a built-in unit holds the couple’s record collection and many of the girls’ toys. The rest of the living room is outfitted with a charcoal sectional, a chair and a plush rug. Nearby, a wooden live-edge dining room table is surrounded by a bench and four blue velvet chairs.

But the most eye-catching element of the downstairs is the staircase wall, clad in a goldenrod-and-white botanical-print wallpaper. Gerding discovered the print by designer Aliz Arteta on Etsy and was able to customize the color on the digital printing company Spoonflower.

The staircase itself is beautiful, too, with a wrought-iron railing and risers covered with patterned cement tiles, which Gerding also incorporated into the floor of the new mudroom.

Upstairs are a laundry room and the kids’ bedrooms, bathroom and playroom. The main bedroom is a serene scene, save for another hit of wallpaper — gold bees on a deep teal backdrop by York Wallcoverings. A small patio just right for sipping wine on a summer night and a light-filled walk-in closet round out the space, along with the bathroom. 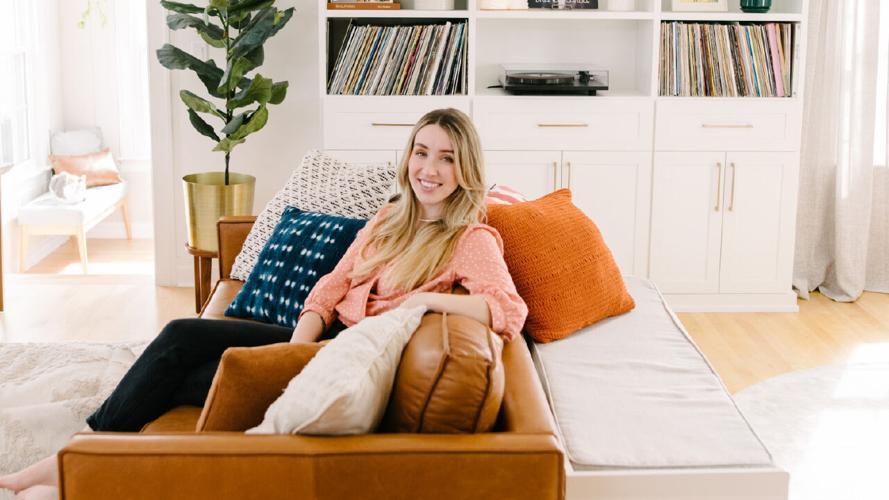 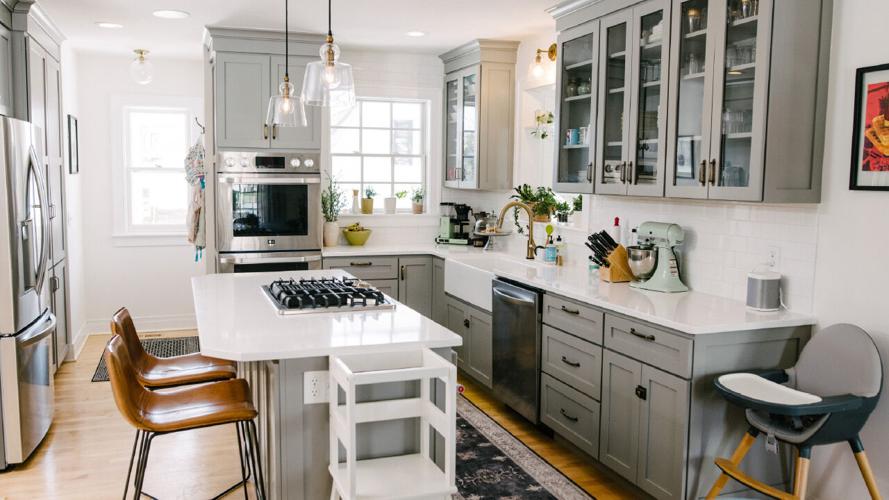 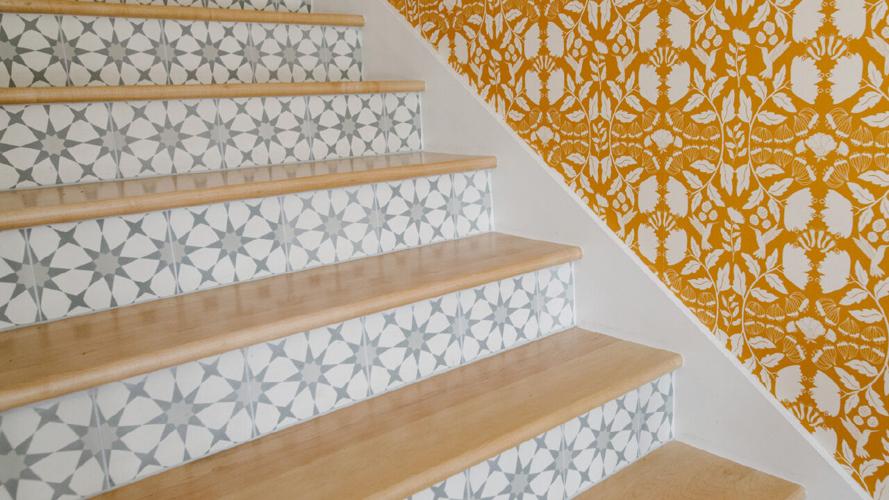 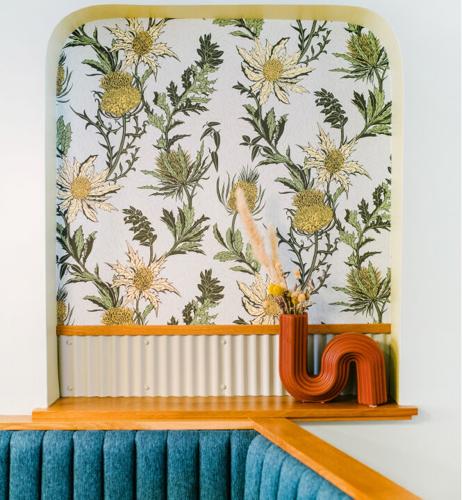 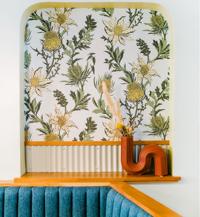 The space features calacatta gold marble hexagon tiles on the floor, white subway tile on the walls and a white tub inside an expansive shower. Gerding savors time spent here.

“It’s my favorite room in the house,” she says. “I love taking baths, and it’s a good escape spot.”