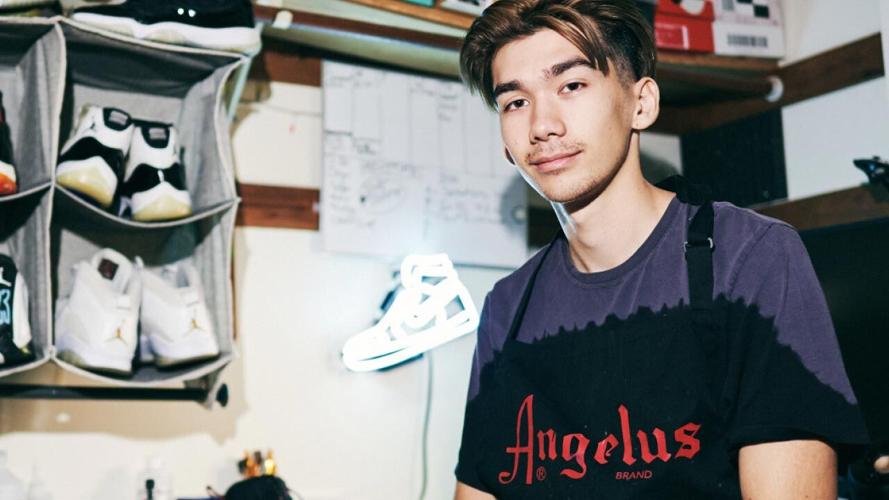 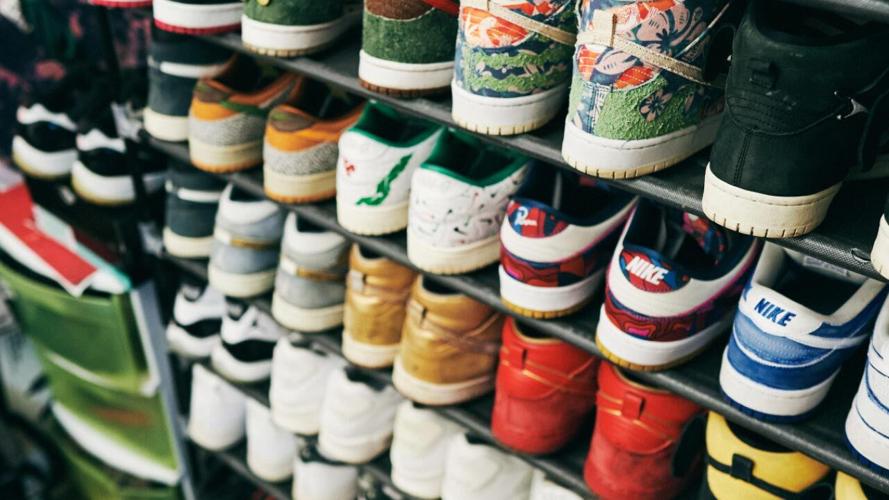 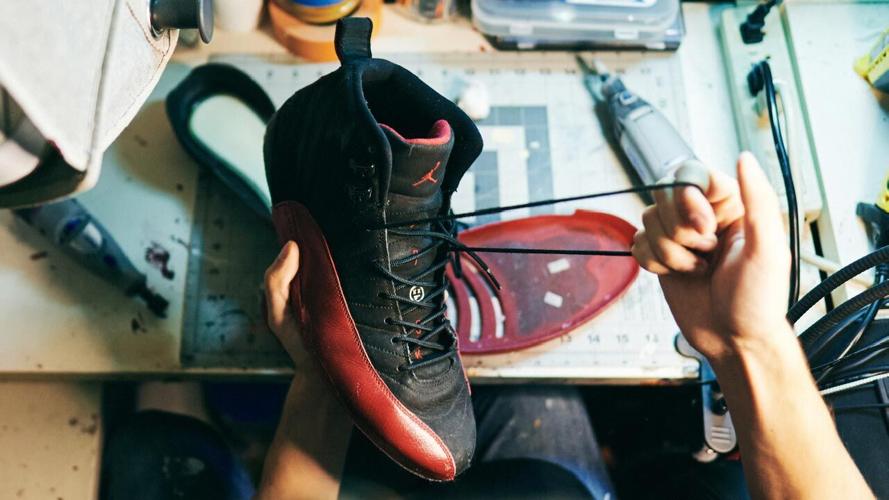 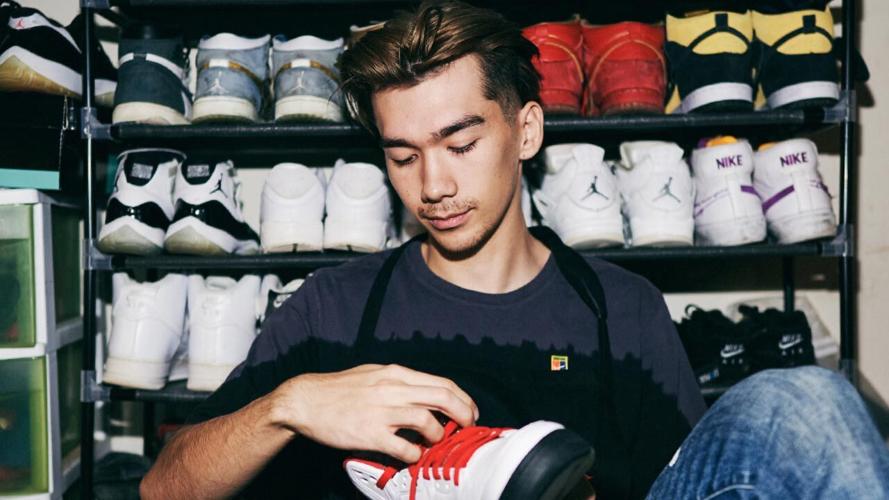 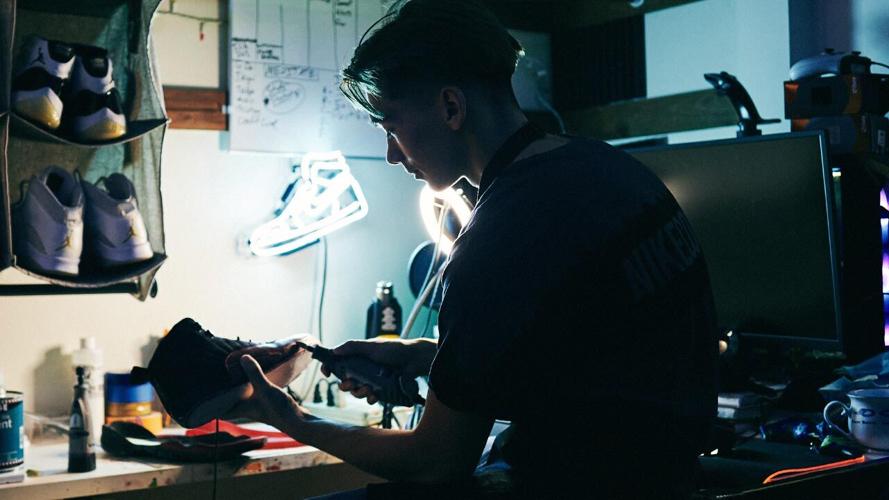 When hardcore sneaker fans get a new pair of kicks, they have a choice to make: to wear or not to wear the shoes.

If they treat them like collectibles and set them on a shelf to be admired but not worn, there’s a good chance the footwear — which can range in cost from a hundred to even thousands of dollars — will remain clean and pristine.

But if the high-end sneaker owner wears them often, the shoes will eventually show it. The shoes will get dirty and scuffed. The paint will fade or peel and the plastic will crack. The tongue may tear and the sole will become unglued and begin flopping around like a fish out of water.

If that happens, folks usually have to accept that their once-prized sneakers are now dead.

But before you send those shoes off to the big footlocker in the sky, you should know that there’s a 21-year-old in town who specializes in this kind of shoe restoration.

“I can clean them, repaint them, [apply] reverse yellowing and swap out the soles or reglue them,” Ian Matthews says. “I can also touch up logos, fix tears in the fabric and renap suede.”

Matthews has been working as a modern-day cobbler for just over three years. “I learned how to clean my own shoes really well and figured I could do that for my friends and charge them a little bit,” he says. He got his start by doing cleanings, reverse sole yellowings and paint jobs. “It took off from there,” he says.

He works from a small desk in his bedroom. Among his many tools are X-Acto knives, a heat gun, paintbrushes, fabric brushes, various grades of sandpaper, a rainbow of paint colors, urethane-based cement, an airbrush machine and an ultraviolet lightbox.

“The soles of shoes start to yellow just like how a cut apple will get brown — it’s oxidation,” he explains. To reverse it, he paints on a 40-volume creme developer (which contains hydrogen peroxide) before covering the shoes in plastic wrap and placing them under a UV light.

Matthews learned all the tricks and techniques for sneaker restoration from a familiar teaching tool for the younger set: YouTube videos. “And through trial and error,” he adds with a laugh.

He gets most of his customers from friends telling other friends about his restoration skills and through Instagram, where he posts the before-and-after photos of his work.

In all, Matthews estimates that he’s restored about 300 pairs of shoes. Largely, it’s been Jordans and other Nikes but also some Vans, Converse All Stars, Timberland boots, Yeezys and a few dress shoes.

Pricing ranges from $20 and up for cleanings, around $50 for sole reverse-yellowing, between $35 and $80 for painting and about $100 for re-glues. “I usually ask for pictures so I can see what I’m dealing with,” he says of working with new customers.

For Matthews, this work is “a side hustle,” he says. “I don’t like to view it as a job. I like doing it as a hobby because it’s more fun for me that way. You start losing your passion for something if you only do it for money. So I focus on doing it just to get better at it as a craft.”

He’s also begun branching out into custom work that infuses a lot of creativity and color into the sneakers. “There’s a lot you can do with some paint and a pair of white shoes,” he explains.

He says that shoes are important to different people depending on their need and use. And, for many of his customers, Matthews says shoes are nostalgic.

“Having something that holds emotional value is important,” he says. “Like hearing one of your old favorite songs or smelling the food your mom used to make [that] brings us back to our favorite moments. There’s others like me that really understand how valuable a pair of shoes is. So that’s what motivates me to offer my services to sneaker-heads like me, to put a smile on their face when they slip their favorite shoes on one more time.”

Steven Potter is a contributing writer for Madison Magazine and a senior producer with Wisconsin Public Radio. Find Ian Matthews on Instagram.