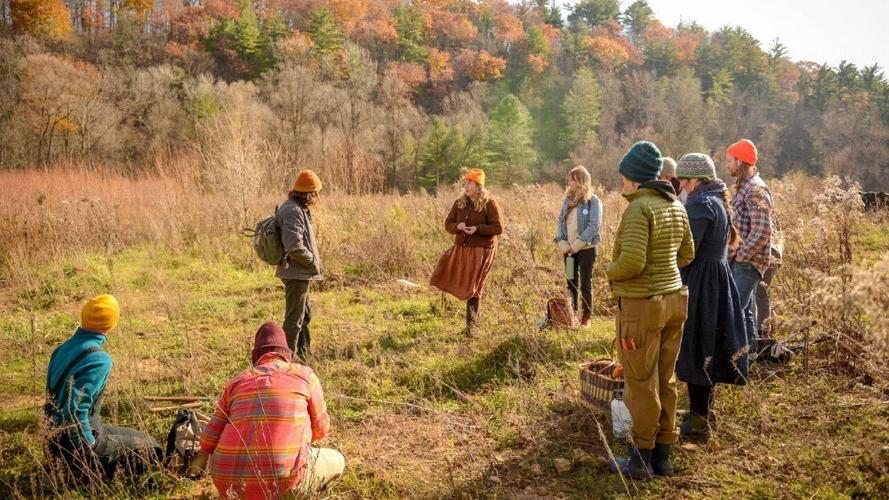 group of people gathered in a field 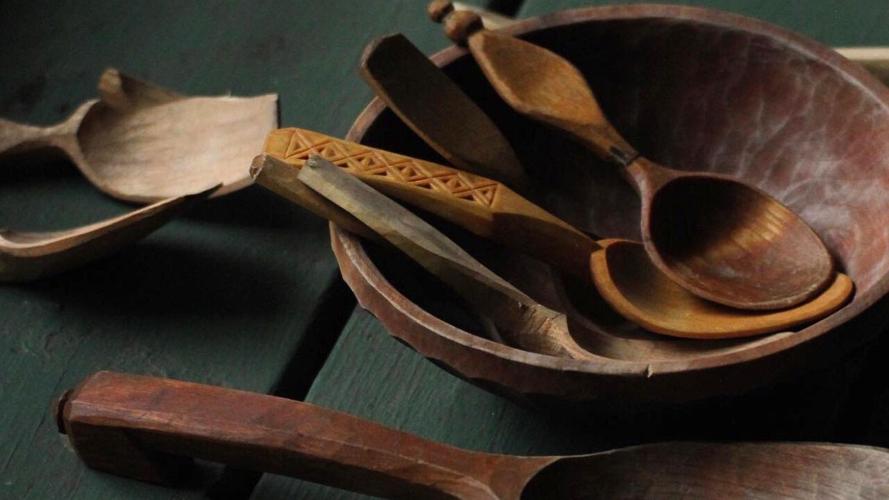 Driftless Folk School classes are open to anyone who wishes to learn a variety of skills. One popular class is wood spoon carving, like the examples shown here, crafted by Sylva Spoon’s Tom Bartlett of Madison, who teaches the carving course. (Courtesy of Driftless Folk School) 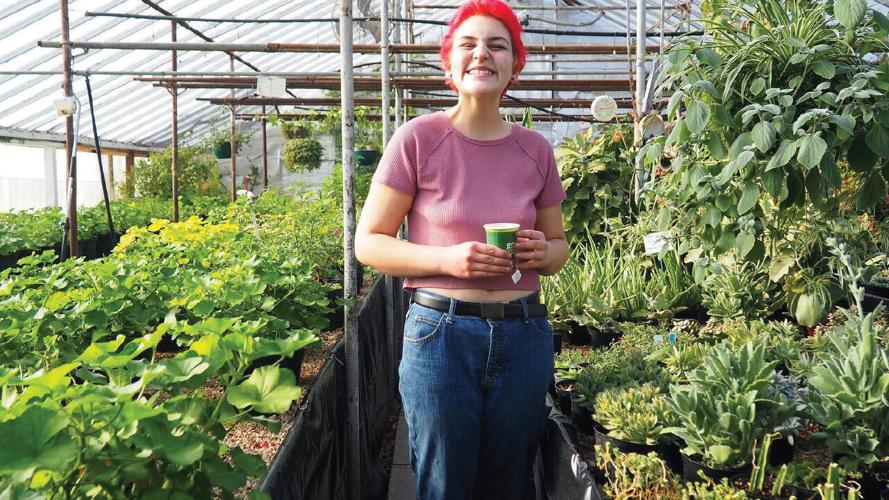 It’s late February in the heart of the Driftless Region — about a two-hour drive west of Madison — and community members of all ages and backgrounds are gathering inside Viroqua’s Blue Bobbin Studio to learn how to sew a burial shroud. A few blocks away, others gather at Thoreau Garden Greenhouse for a one-day class on seed gathering and garden planning. A month later, in an instructor’s home in the nearby town of Viola, courses will be held on basic spoon carving and constructing boxes out of birch bark. For those who can’t make the drive, an online class on cultured dairy products is scheduled for April. It’s all part of the Driftless Folk School, a unique educational effort based on a century-old Scandinavian tradition — one that draws students and instructors from far and wide, including Madison. It provides noncredit, a la carte classes at businesses, homes, public parks and other venues year-round, in a wide range of folk arts and wilderness skills — things like animal butchering, food preservation and furniture making — that take participants back to basics in order to build a more sustainable future.

“I grew up doing a lot of things at home that the folk school teaches,” says Driftless Folk School Director Jacob Hundt, who helped found the effort in 2006. He was also raised to think about alternative forms of education — his family helped start Viroqua’s Waldorf Schools at both the elementary and high school levels. After high school, he spent two years at Deep Springs College near Death Valley, California, a then-one-of-a-kind, small-scale, land- and labor-focused, private two-year college founded in 1917. Now Deep Springs is a model for the burgeoning “microcollege” movement that’s been gaining momentum over the last several years. Although Hundt didn’t know it at the time, these experiences would influence not only the creation of the Driftless Folk School, but also of the newer Thoreau College, a Viroqua-based microcollege of which he is a founding member and, since 2019, the executive director. Thoreau College launched its first full-year program in fall 2021 and will eventually be an accredited two-year college with transferable credits.

“The microcollege model is clearly an innovation in this country. I think that we’re in an environment where traditional higher education with a campus and a four-year degree program has been seriously disrupted,” says Hundt, who earned his bachelor’s degree at the American University of Bulgaria and his master’s at the University of Chicago before returning to the Viroqua area, where he was a high school teacher and counselor from 2004 to 2021. He visits other high schools to spread awareness about Thoreau, including Shabazz City High School in Madison. Thoreau students have included former Shabazz students, a four-year college student taking a gap year and a student who graduated early from high school. Others have been people who plan to relocate to Viroqua, so they’re looking for an inroad with local businesses, farms or organizations.

“Many people are recognizing [college] as being far too expensive and too inflexible,” Hundt says. “Even before the pandemic, fewer young people were going to college. And now you can actually get trained in all kinds of practical job skills, tech skills, things like that, online, from anywhere in the world, at kind of your own schedule.”

But what’s missing from virtual education, Hundt says, are the good parts of a campus community, like forging relationships with other students and receiving close, personalized attention from faculty. There’s also a sector of students who aren’t interested in having to choose between either a traditional liberal arts college or a technical school — microcolleges present another option. Another hallmark of microcolleges is that they keep their student bodies deliberately small — Deep Springs has no more than 25 to 30 students at a time and Thoreau College is built for about 12 students per year.

As with the Driftless Folk School, Thoreau College’s students participate in a range of nature-based classes with practical, real-world applications — some even taught by Driftless Folk School instructors. But they also pursue rigorous academic coursework, operate a commercial greenhouse and garden center with a small shop, perform labor on a small nearby farm, live cooperatively in houses in town and are involved in the governance of the college at all levels, including budgeting and hiring. Tuition is also customized on a sliding scale, ensuring money is never a barrier.

“I didn’t want to just get another piece of paper that says, ‘You completed this program,’ ” says Liam McGilligan, a 2016 Madison West High School alumnus, 2020 University of Minnesota graduate and current Thoreau College student. “I started reading about Thoreau and it just blew me away.” As a performer and writer with interests in politics, entrepreneurship, philosophy, nature and community-building, McGilligan felt a kinship with the “five pillars” of Thoreau College’s curriculum: academics, labor, self-governance, art and nature. He’d never heard of a microcollege until he stumbled upon it when Googling something else.

“I don’t use the word serendipity too often,” McGilligan says, “but I think it truly was.”

The born-and-raised Madisonian graduated from Minnesota’s Guthrie Theater actor training program at the beginning of the pandemic. He had plans to return to Madison for a role in a January 2021 Forward Theater show and spent the interim researching someone named Algie Shivers. The son of an enslaved man, Shivers established a settlement near Viroqua in the 1850s, a place where formerly enslaved people, Native Americans, and Bohemian and Norwegian immigrants all lived together. The history was fascinating to McGilligan, who thought he might write a stage play. Googling Shivers led him to a documentary made by Micah Robinson. Googling Robinson led him to a Facebook post by Thoreau College. “I’m like, ‘Oh, that’s weird. I went to Thoreau Elementary [in Madison],’ ” McGilligan says. “So I clicked Thoreau College and I started reading about it and everything has changed since then.”

After the pandemic forced the cancellation of his Forward Theater show, and following a brief move to New York before returning to Madison, McGilligan packed up and headed to Thoreau College, where learning didn’t stop with books. For example, after reading “Braiding Sweetgrass” by Potawatomi author Robin Wall Kimmerer, McGilligan’s class visited a nearby county park, waded into the swamp and harvested cattails; then an Anishinaabe basketweaver taught them how to turn them into baskets. They’ve camped in the Boundary Waters and the Kickapoo Valley Reserve. They’ve repaired buildings, trimmed plants and worked the shop at the greenhouse.

“There are a lot of people here that are successful without having gone to college — businesspeople, artists, craftsmen, educators — who young people can look around and see [they] don’t have to fit into this mold,” says McGilligan. “You have the hippies that moved here in the ’60s and ’70s, counterculture people. You have a large Amish population. And then you have your classic Wisconsin countryside Republican conservatives. All of these communities are here, trying to coexist and learn from each other.”

He says this country is so divided today, so polarized; Thoreau College and the Driftless Folk School are the models we need.

“I just want people to know that on top of all the academics and the labor and the uniqueness of the curriculum, we’re trying to create a culture where we can really speak our minds and disagree civilly and learn from each other,” McGilligan says.

Maggie Ginsberg is an associate editor of Madison Magazine.