There’s nothing like Mom’s home cooking. That’s especially true for brothers Assan and Malick Joof and brothers Papa and Babacar Kone, whose mothers are talented cooks of West African food and happen to be best friends of 20 years.

Oddly enough, the mothers are both named Fatou, which made naming Keur Fatou Catering — the business that the boys, along with Malick’s wife Harriet Gomez, convinced their mothers to become the chefs for — an easy decision. Now the people of Madison can also enjoy the Senegalese and Gambian recipes the brothers grew up with.

Keur means “house” in Wolof, a language native to Senegal, Gambia and Mauritania. As the name suggests, Keur Fatou Catering is like being invited into “Fatou’s house” for a home-cooked meal. Papa and Babacar’s mother moved to Madison 30 years ago from Senegal, while Assan and Malick’s mother moved here from Gambia around the same time. They met in Madison and formed a friendship.

Gomez, who moved to Texas from Gambia in 2001 and came to Madison in 2004, has been married to Malick for 11 of the 16 years she’s known him. Assan and Babacar played soccer together for years. “The group was just meant to be,” Gomez says.

During an interview with Gomez, Assan and Babacar, the three joked with one another and completed each other’s sentences, telling a collective story. It’s not always easy running a business with five people — especially when they all have day jobs — Babacar says, “but the reason why it’s working is because we get along and know where to help each other.”

“We are used to each other, we can yell at each other,” Gomez says. “But at the same time we can always come back together because we know it’s coming from a really good place.”

In other words, they are family — a family that is passionate about making good food, and it shows. People keep coming back for Keur Fatou’s cuisine. 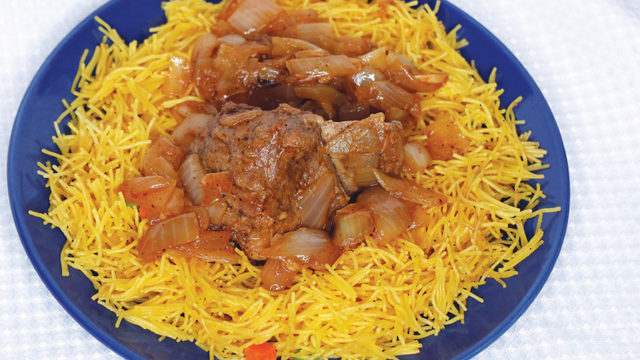 The owners say it’s the spices — ”It gives the food that exceptional flavor,” Gomez says. “When people eat our food, the first thing they say is, ‘That flavor! Where is it from?’ ”

They don’t compromise on much when it comes to taste, Babacar says. “What you are going to taste at our house is what we are trying to provide to people,” he says.

Gomez says one of their most popular dishes is chicken yassa, made of grilled chicken with caramelized onions and “Senegambian” spices (some dishes from Senegal and Gambia are called Senegambian, referring to the region both countries lie within in West Africa). Senegal and Gambia share a border and have many commonalities, including language (Wolof), music and food. Another popular dish is chicken mafé, served in a thick peanut sauce.

In addition to introducing people to the food of Senegal and Gambia, the owners hope to teach people about where they are from. “One thing I’ve noticed is that a lot of people don’t realize that Africa is a continent,” Gomez says. “They just think that everybody who is from Africa is together. If we say, ‘African food,’ people compare us to Buraka [a Williamson Street restaurant]. Buraka is an Ethiopian restaurant — the food is completely different. We want to make sure we differentiate ourselves.”

The founders of Keur Fatou plan to continue to share West African food with the Madison community. The next step is a food cart, but a restaurant might be in the future, too.

Erica Krug is a Madison-based writer.