More Americans Are Saving Than Ever Before, Though in Unequal Amounts

Families across the U.S. are financially diverse — and so is how they save. But across the board, more are saving now than ever before, whether it’s for emergency expenses or retirement.

The recently released 2019 Survey of Consumer Finances from the Federal Reserve Board allows a 30-year look-back on family finances to see how saving practices have changed. The data reveals that Americans have better access to financial assets like bank and investment accounts, but it also shows that wide disparities persist in who has those assets and how much they’re worth. While the data period doesn’t cover the current recession, it can provide hints at where savings habits might be headed when the coronavirus pandemic and related economic effects are in the rearview.

Why American families save

From 1989 to 2019, retirement and liquidity — having cash on hand — have taken turns being American families’ primary reason for saving, according to the Survey of Consumer Finances. But since 2010, liquidity has been the top driver.

When unexpected bills, unemployment or a pandemic hit, having accessible cash makes it easier to cope and provides peace of mind. A common guide is to build over time and eventually have three to six months of expenses on hand in an emergency fund. And though just 63% of Americans could cover an unexpected $400 bill, according to the Federal Reserve Board, the fact that it tops the reasons people save indicates the lack of emergency cash isn’t for a lack of trying. 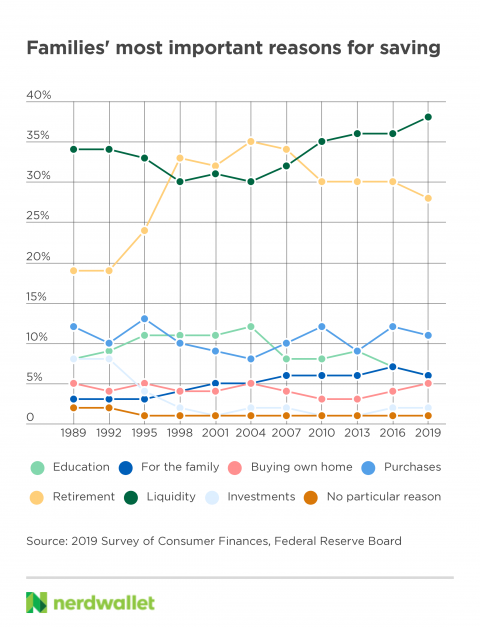 Savings you can quickly access in an emergency (liquidity) and money to live on in retirement are both very important, and those are two financial goals that can grow with you.

Start by setting aside money for emergencies, whether that’s a month’s worth of living expenses or a couple hundred dollars if that’s more realistic given your income and expenses. Once you have an emergency fund started, turn toward your retirement savings, starting or increasing contributions as you can. When that’s looking good, turn back to liquidity and stash away some additional funds. In this way, you can incrementally increase your financial security on both fronts over time.

Over the past 30 years, the share of American families with any financial assets — including money held in checking and savings accounts, CDs, stocks and bonds, retirement accounts, cash value life insurance and more — has grown considerably, from 89% to 99%.

Growth in the share of people holding these assets has been most significant among groups often left behind due to poverty and/or systemic racism reaching into wealth-building and income, for example.

This growth is notable, but it doesn’t tell the entire story. Just how much these families have in their bank accounts and retirement funds is still far behind their white counterparts. In fact, the 2019 median value of financial assets among white families is about $49,500 compared with $5,500 among Black families and $3,000 among Latino families. The typical value of assets for single-parent families, regardless of race, is $4,000.

It can be hard to save and accumulate financial assets when your income is low, debt is high, you don’t have the same access to financial tools and resources as others, or if you opt out of the traditional banking system. However, saving even a little can make a big difference — a savings account balance above just $100 is correlated with keeping the utilities on and avoiding high-interest loans, according to research from SaverLife, a nonprofit helping families save. So tuck away what you can from each paycheck, even if it seems like a drop in the bucket. Setting small goals such as $200 or $500 will get you started and give you peace of mind that you have some cushion available.

The bulk of American families’ financial assets — 36% of them, on average — are held in retirement accounts. Thirty years ago, just 21% of financial assets were held in such accounts, only a bit more than those held in transaction accounts such as checking and savings accounts. 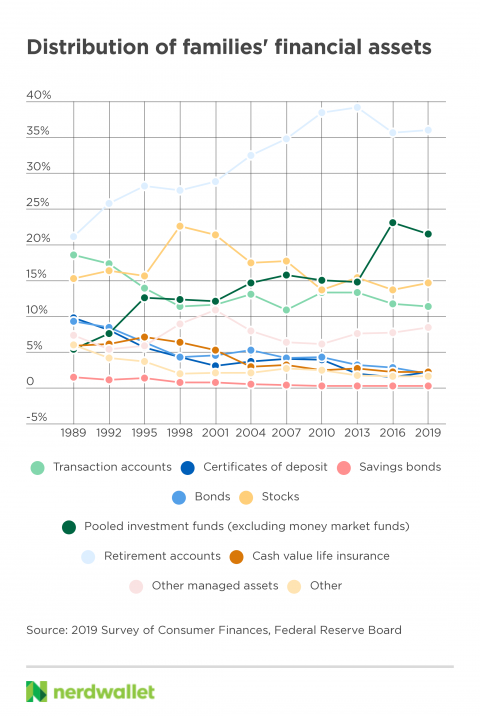 But not everyone has the same access to such accounts. For example, just 34% of single parents, 35% of Black families and 26% of Latino families have retirement accounts. That’s compared to 57% of white families.

Once you have an emergency fund started, it’s time to begin saving for retirement. Do what you can, as you can. And when your financial situation allows it, do more.

If your employer offers 401(k) matching, contribute enough to take advantage of all of the free money. If it doesn’t, you’re on your own to develop and fund a retirement account. Start somewhere: Putting aside a small portion of each paycheck into an IRA will give you something to build on for years to come.

No matter your goals, saving is a lifelong journey. Your ability to accumulate financial assets such as cash and retirement savings depends on factors within your immediate control, such as budgeting, and those you may have less to say about, such as how your neighborhood, education and race affect your economic mobility. Even your ability to control your budget is dependent on having enough money to manage in the first place, and in a period of continued high unemployment, many Americans are struggling to stretch every dollar. In situations such as this, even the smallest steps are progress and can lay the groundwork for greater economic security both when the next bill comes due and into the future.

The article More Americans Are Saving Than Ever Before, Though in Unequal Amounts originally appeared on NerdWallet.

Here's what happens to your lungs when you get COVID

MPD investigating after woman says stranger tried to break down door, shoot her

Alert Days in the forecast -Haddie

UW-Madison says 1,800 members of campus community qualify in next round of vaccines

The Mega Millions jackpot is $1 billion -- but your odds of winning it all are 1 in 302.5 million

Cheer on the Packers virtually, submit your photos