Has the Airbnb bubble burst?

According to one recent viral tweet, Airbnb hosts have seen bookings evaporate since the busy summer travel season. 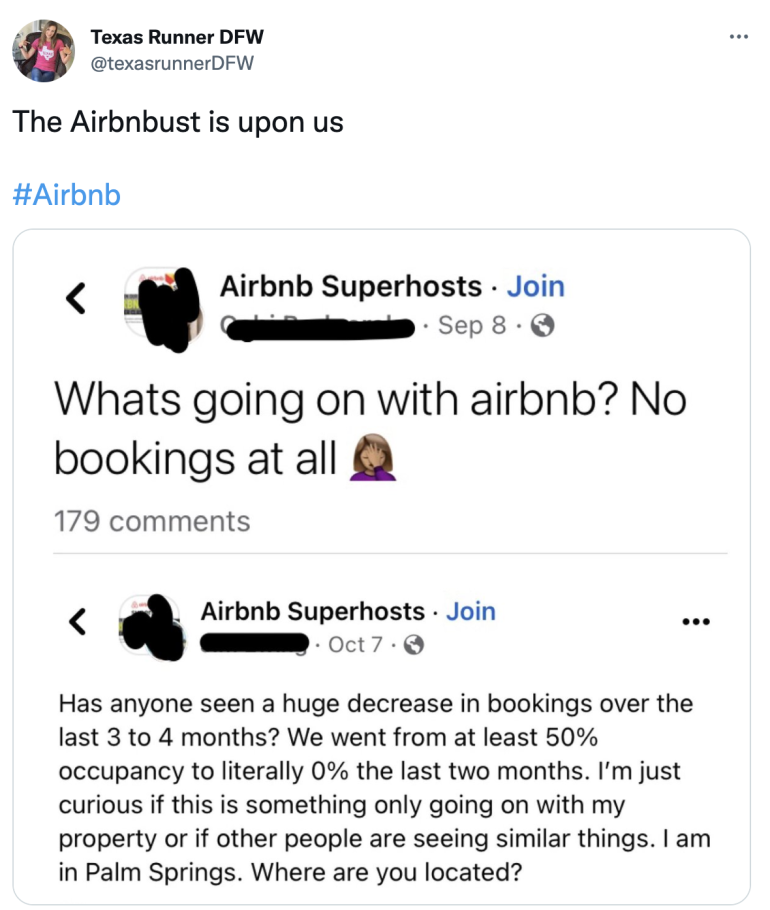 My recent story about Airbnb hosts getting sick of Airbnb made its own little splash, based on the number of emails I received in response. And anti-Airbnb sentiment has bubbled up everywhere, from Reddit to the Wall Street Journal.

Yet the so-called #Airbnbust, like most social media phenomena, seems to inaccurately reflect what’s actually happening in the real world. Total demand for short-term rentals actually rose 24% in September compared with the same month last year, according to a recent report by AirDNA, a vacation rental data platform. Average daily rates rose a staggering 31.9% compared with 2019.

So, based on social media, everyone is fed up with Airbnb. Based on what’s happening in the real world, Airbnb is doing better than ever. What gives?

Remember Apple’s “Batterygate” scandal? Back in 2017 (roughly 5,000 years ago), the company was accused of “planned obsolescence” with software updates for its iPhones. Basically, Apple was sued for intentionally slowing down its older phones in an effort to get more customers to upgrade to newer models.

Social media was filled with vitriolic backlash at the time, with iPhone users proclaiming that they would switch to Android devices in droves. Did that happen? Well, Apple was a $671 billion company in 2017 and has more than tripled in value to $2.5 trillion since. So, um, no.

The problem for Apple users and Airbnb guests is that, while they might not like everything these companies are doing, they like the alternatives even less.

Switching to Android means learning a new interface and becoming a possibly dreaded green bubble on iMessage. And switching from Airbnb means either going “back” to hotels, which have their own drawbacks, or using Airbnb’s competitors, which aren’t much better.

Someone trying to book a house with friends in Palm Springs or backpack through South America on a shoestring is still likely to turn to Airbnb. There simply aren’t many good alternatives.

At least, not yet.

I chatted with Lee Gonzalez, who, with her sister Lauren, is trying something daring: Building hostels in America. Their company, L&L hospitality, opened a new hostel in New York City in 2014, and another in Portland, Oregon, in 2021. She says they struggled with the word “hostel” early on, but have since come to embrace it.

“Many travelers categorically reject hostels in the U.S. — they think of the YMCA,” Gonzalez says. “In the end, we like the word. We want people to come with that hostel attitude.”

Their Portland property — called Lolo Pass — bucks the stereotypical hostel image of grimy dorms with an even grimier guy noodling on guitar in the common room (at least, that’s my image). The rooms at Loss Pass are minimal but stylish. And the emphasis is on connecting guests with each other and the surrounding area. 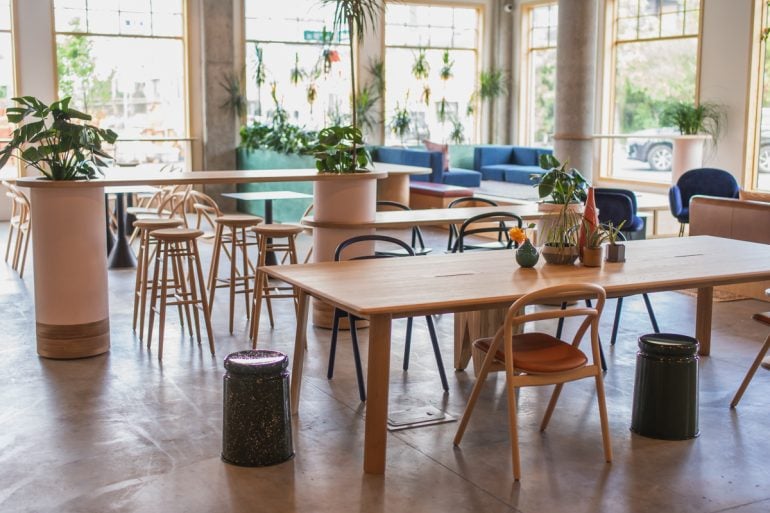 The hostel model thrives in Europe, but will North Americans ever come around? (Photo courtesy of L&L hospitality)

When I asked why her hostels could snatch some of Airbnb’s market share, Gonzalez gave me a laundry list of reasons. Her properties are affordable, clean (but no cleaning fees!) and run by professional, on-site hosts. Even little things, like being able to leave your luggage after check-out, make hostels more convenient than Airbnbs.

The biggest hurdle, as mentioned, is getting over North Americans’ aversion to the idea of hostels. Yet Gonzalez believes that Airbnb has itself set the stage for this transition, especially among younger travelers.

“I’ve realized that Aribnb has actually paved the way for hostels to work in the U.S. by introducing the idea of shared spaces,” she explains. “Because Gen Z was raised with Airbnb, they don’t have the preconceived notions about hostels that older people do.”

Hostels only challenge part of Airbnb’s business model — the part that attracts low-frills travelers looking for a cheaper alternative to hotels. And legacy hotel brands aren’t ready to go down without a fight. Hilton hotels recently aired a commercial squarely aimed at disgruntled Airbnbers, featuring a creepy vacation rental full of talking dolls, while extolling the reliable virtues of an old-fashioned hotel room.

And maybe Airbnb needs some disruption of its own. After turning the entire travel industry on its head after launching 15 years ago, the vacation rental behemoth is no longer the young upstart. Maybe a new model is ready to emerge. What happens next depends on what we — the paying guests — decide to do.

The article Airbnb Is on the Outs — Or Is It? originally appeared on NerdWallet.