Team has an arsenal of ghost hunting gear

Waunakee resident Jason Bertram traces his interest in ghosts back to his childhood. His family owned a West Bend-area restaurant and bar in an 1800s-era building in which creepy things happened.

“A clunk, a crash, a door would slam, lights would blink,” he says. “My sister and I would be huddled together scared beyond belief [hearing] something walking up the old stairs.

“Back then you just didn’t know what to make of it. In today’s world, now it’s welcomed, now it’s interesting. Now you go on the Travel Channel and they’ve got shows – everything from ‘Paranormal States’ to ‘Ghost Adventures.’ ”

Bertram, a former member of the Sun Prairie Police Department, was fascinated with an earlier show, “Ghost Hunters,” which aired on Syfy (previously the Sci-Fi Channel) from 2004 to 2016 and was revived on A&E in August. The show followed occult investigators and plumbers Jason Hawes and Grant Wilson, who founded The Atlantic Paranormal Society.

Bertram’s love for the show was shared by Scott Timm, then a fellow Sun Prairie police officer.

It was just a shared interest until after 2005, when Bertram, seated in his patrol car on the side of a highway, was struck from behind by another vehicle. Bertram suffered spinal injuries and reluctantly decided to retire from the force.

But Bertram missed being an investigator, so in 2009 he and Timm (now a supervised release specialist for the Department of Health Services) established the group Paranormal of Wisconsin. To investigate unexplained phenomena, they merged what they had learned from “Ghost Hunters” with their more than 25 combined years of law enforcement experience.

At no cost, the team – which also includes Bertram’s wife, Michelle, and Amanda Halzer – looks into claims of paranormal activity in private homes and businesses. “We go into it with the mindset that we’re there to gather and collect evidence,” Timm says.

It’s Bertram’s job to respond to people seeking relief from alleged hauntings and assess their credibility. He says he has to root out people making false claims, looking for excitement, trying to get out of a lease or wanting the publicity of having their property declared haunted.

But now and then, amid the tedium of countless hours spent trying to capture the sight or sound of ghosts, unusual things happen. They say they’ve collected recordings of EVPs, or electronic voice phenomenon, at a tattoo parlor in Portage and a condo in Middleton. Bertram and Timm say they saw a desk move across a room and felt “brutal pokes” in an abandoned building in Iowa.

“Don’t get me wrong,” Bertram says. “Ghost hunting is very exciting for us. We have seen and heard some pretty spectacular things at the invitation of the public into their homes or businesses. We are there to provide a service free of charge. Because how do you charge for something like this?”

The only money Paranormal of Wisconsin makes is from the sale of T-shirts through its Facebook page and the occasional paid talk the team is asked to give, which happens a couple times a year, Michelle says.

But an expensive hobby, they admit. They have an arsenal of ghost-hunting equipment – from cameras and digital voice recorders to electromagnetic field detectors and a teddy bear designed to coax child ghosts into communicating – costing thousands of dollars.

“When something is starting to manifest itself or show itself or be in the room with you, you’ll feel cold spots, you’ll feel tingling, electrical charges, and that’s what some of this equipment will tell us when that’s happening,” Bertram says.

An online state-by-state listing of paranormal investigators includes a surprising number in Wisconsin – more than 100. But Bertram sets his group apart from many of the others who have “far-fetched” ideas about what constitutes proof of a ghost or haunting.

“To them, everything is evidence” he says. His team, however, brings “a patrol mind” and “a professionalism to the whole thing.”

Paranormal of Wisconsin, or PoW, uses technology familiar to electricians, who use it to locate uninsulated or malfunctioning wires within walls. Other devices the group uses are available in “starter ghost-hunting kits” sold on amazon.com.

There are those who seriously doubt the usefulness of the items shown here in finding evidence of anything paranormal.

“The supposed links between ghosts and electromagnetic fields, low temperatures, radiation, odd photographic images and so on are based on nothing more than guesses, unproven theories and wild conjecture,” writes Benjamin Radford, deputy editor of Skeptical Inquirer magazine. “If a device could reliably determine the presence or absence of ghosts, then by definition ghosts would be proven to exist.” 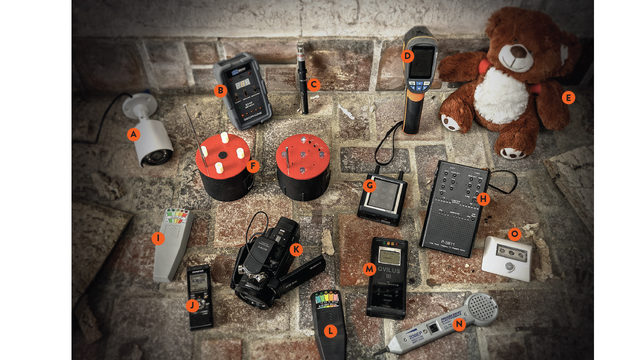 B. EDI METER
Environmental Detection Meters alert investigators to vibrations and the presence of electromagnetic fields.

E. BOO BUDDY
A teddy bear equipped with electric and magnetic field (EMF) detectors and temperature tracking technology. The teddy bear also talks. It can say “I’m Boo Bear. What’s your name?” to elicit responses. “It’s meant to interact with children. Like if you have a spirit of a child, they’re more attracted to this. They’ll touch it, get near it,” says Michelle Bertram of PoW.

G&M. OVILUS
The Ovilus 3 and Ovilus 5 shown here are “ghost boxes,” devices which translate recorded ambient sounds into words that are preselected and stored in their memory.

H. SPIRIT BOX
Sweeps radio frequencies to generate white noise. In the static, ghost hunters try to detect and interpret sounds that could be attempts at communication with the investigators.

I&L. K-II METERS
EMF readers designed to find the source of harmful radiation. But ghost hunters use them to identify energy anomalies which they believe can be evidence of a ghostly presence.

N. INDUCTIVE AMPLIFIER
Used by electricians to detect hidden wires. PoW uses it to detect energy emitted from electrical sources such as appliances, outlets, lights and toys. The presence of electrical energy can make people “feel creeped out or as if they are being followed,” says Jason Bertram of PoW. “If we detect that with the amplifier, it could explain away a paranormal [cause].”

O. MOTION DETECTION DEVICE
Used to alert investigators to movement when they are not present.