MADISON, Wis. – Karben4 Brewing, a craft beer mainstay on the east side, will celebrate its 10th anniversary at their taproom on Saturday, Jan. 21 from 4 p.m. to 9 p.m.

This anniversary party will be a special community gathering that includes two commemorative beer releases.

“The past ten years have been such a wild ride for us” says Karben4 Co-owner Zak Koga. “Both Karben4 and the craft beer world have changed so much and we’re incredibly grateful to be a part of such a great community.”

Over the past decade Karben4 has grown from less than 200 barrels the first year to producing over 11,000 barrels annually.

Karben4 plans to commemorate its 10th anniversary by releasing two special beers on the 21st – the 2023 edition of Priest Prophet and King, a barrel-aged barleywine, and a Grand Cru version of their flagship Fantasy Factory IPA. Both will be available on draft in the taproom as well as in cans.

After two years of smaller capacity parties due to the pandemic, Karben4 anticipates this celebration will be their largest yet.

“The largest thanks is to our customers and supporters” says Co-owner and Brewmaster Ryan Koga. “Without your support, none of this would have been possible.”

Karben4 Brewing is located at 3698 Kinsman Blvd. in Madison. 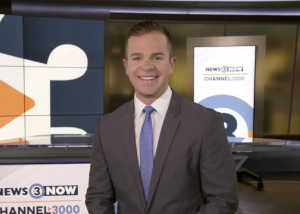 Josh Spreiter is an anchor for News 3 Now This Morning. If you have a person or place you'd like to see featured on In the 608, send an e-mail to inthe608@wisctv.com. Hometown: Litchfield, MN High School: Litchfield High School College: Southwest Minnesota State University Other Journalism Experience: WOWT, KSNB, WEAU, WCCO, KLFD Started at News 3 Now on: June 2018 What is your favorite part about living in Madison? I love its diversity. The people are so accepting. There is also so much to do and see! What is the biggest news story that you’ve covered?  When I worked in Omaha, my photographer and I chased severe storms in southwest Iowa. We were the first ones on scene of a home destroyed by a tornado as the family came out of their shelter. We captured it all on live television. We even beat emergency crews there. What do you like to do in your spare time?  I’m a certified yoga teacher so I love spending time on the mat. I also enjoy spending time exploring outdoors. What is your favorite kind of ice cream?  Butter Brickle is my everything! What is your favorite place to vacation?  I love cruising in the Caribbean. Who is your hero and why?  My Grandma Peg Shaw is my hero. She is the kindest and most humble person I know. She puts others first and never complains about anything. What is your favorite sport to play or watch?  I grew up in a big hockey family in Minnesota. I played all the way through high School. What is your favorite tradition around the holidays?  I love spending time with family. I’m lucky enough to live and work close to home so getting together with my family is still pretty easy to do. What is your favorite song of all time? I’m a big fan of The Chainsmokers. It would probably come down to “Closer,” “Something Just Like This,” or “Paris.” What is your favorite movie of all time?  Miracle on Ice. What is the best piece of advice you have ever received?  The best piece of advice I’ve ever received is to stay positive. There are many time in life we go through rough patches, but staying positive and looking forward always helps me overcome obstacles. If you could relive any moment, what would that be?  If I could relive any moment, I think it would be the first time I experienced live television as a reporter down the road in Eau Claire. I remember how nervous I was thinking I’d screw up. When I look back, I realize it was no big deal.