Exotic pets have a certain allure

Exotic pets have a certain allure. Despite widespread fear of slithering, scaly, spiky and sometimes bitey animals, many people enthusiastically keep them as pets or breed them to sell. They find reptiles, amphibians, invertebrates and other unusual animals fascinating and consider their specialized care requirements worth the challenge. But as this hobby grows, so does the number of animals that either perish due to improper husbandry or are surrendered to rescue groups by owners unable or unwilling to meet the pets’ long-term needs. So before buying an exotic pet, do your research, starting here.

Dogs and cats get the most pet love and attention. Dogs have their own parks and cats have the most famous Instagram feeds. And a vast majority of the real estate in every local pet store is taken up by dog and cat food, toys and accessories.

Yet the fur-baby-loving majority may be surprised to learn that exotic pets, including the scaly ones, have a dedicated local following, too. 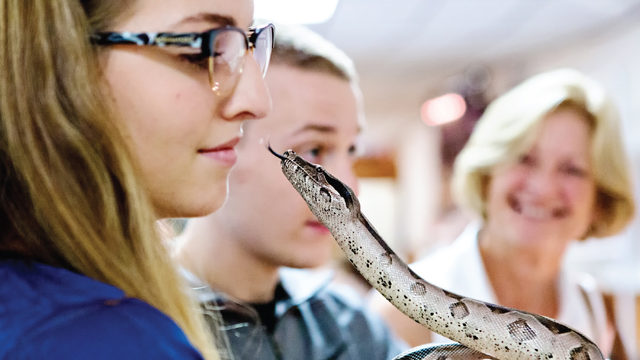 Among these adherents are a school teacher who traveled to the Amazon rainforest to see in the wild the same species of dart frogs she breeds in captivity; an engineering consultant with a side business breeding pythons and anacondas; and a woman who has spent a decade rescuing sugar gliders from people who tire of caring for the little nighttime-barking marsupials.

Catering to the local cold-blooded-animal-loving crowd are a specialty pet store and a twice-a-year expo, both in Monona, as well as the Madison Area Herpetological Society, or MAHS — arguably the most active (although not the largest) “herp” group in the country. 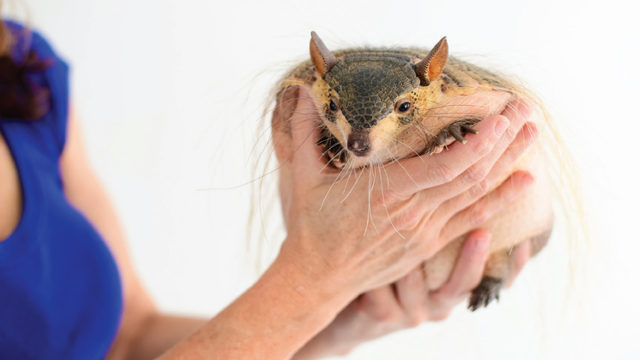 As pets go, however, let’s be honest: Reptiles more frequently elicit fear in people than a desire to keep them as pets. According to a 2019 national survey of pet owners, 4.5 million U.S. households have a reptile — compared to 63.4 million homes with dogs and 42.7 million homes with one or more cats.

Richard Allen, owner of the Monona Drive pet store Reptile Rapture, says the reptile share of the pet market is increasing. “It’s getting bigger and bigger the more people learn about the animals and the proper way to keep them,” he says. 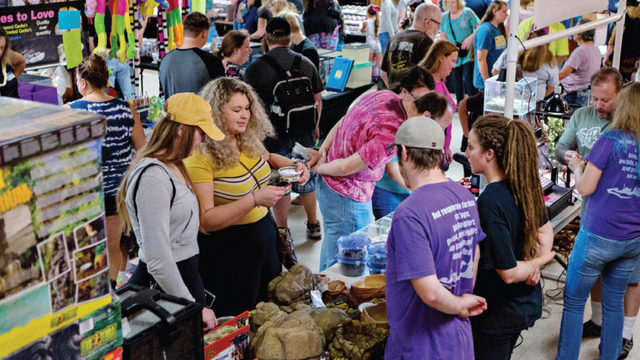 There were unusual mammals at the recent WIRE show, too. Show organizer Jim Stelpflug, owner of Southwest Wisconsin Reptiles and Tri-State Hedgehogs & Exotics, brought three hedgehogs. You needed thick rubber gloves to handle the shy, spiky insectivores at first, but they stuck their twitchy noses out and laid down their quills as they relaxed.

Noelle Tarrant brought to the show a skunk, two lemurs and a hairy armadillo — all animals she cares for on a nearly 5-acre parcel in the Wisconsin Dells area and includes in her Zoozort Live Animal Programs. An educator for 30 years, Tarrant says the only species she breeds is the dwarf hairy armadillo.

While breeding is a hobby business for most of the two dozen vendors who attend WIRE, the biggest breeder and retail business at the show is Reptile Rapture. 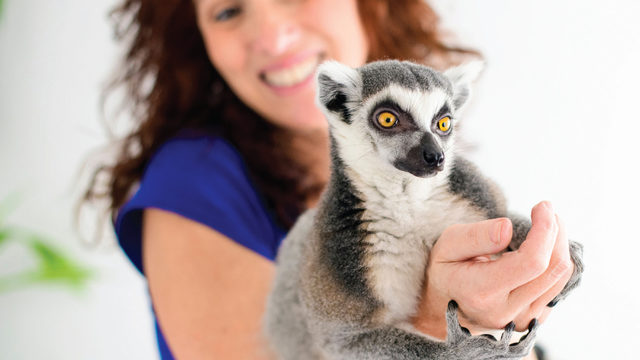 Before opening Reptile Rapture at a different east side location in 2008, Allen spent years as a hobby keeper, breeder and importer of reptiles, then as a vendor at reptile shows throughout the Midwest.

Allen says he no longer imports animals and the store and its online business keep him and his staff too busy — they ship animals all over the continental U.S. and dry goods worldwide — to vend at shows other than WIRE.

“On the weekends we are crowded with people from out of state,” Allen says. “We get so many people from Illinois. There was one guy who drove all the way from Arkansas to buy a monitor [lizard] from us.”

People will also travel great distances to attend expos, too, such as the North American Reptile Breeders Conference, or NARBC — billed as the world’s largest reptile show — which is held every spring and fall in the Chicago suburb of Tinley Park. 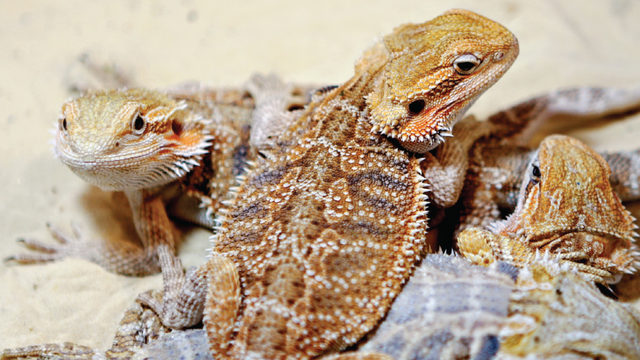 You can find Ryan McVeigh there and at 10 other expos held annually across the U.S. representing the commercial side of the hobby. McVeigh, who founded MAHS, is the brand manager for Zilla, the national reptile division of Central Garden & Pet Co.

A former Madison resident, McVeigh says he keeps a pared down collection of 64 reptiles and 90 invertebrates (including 20 tarantulas) at his home south of Gurnee, Illinois. Another 26 of his own animals reside at his workplace, the Zilla Lab in Franklin, Wisconsin.

“Reptiles have been a passion and hobby of mine since I was 3 or 4 years old,” he says. “It’s the typical story: I liked dinosaurs, then I found reptiles. … That’s like 84% of every reptile keeper’s story.” 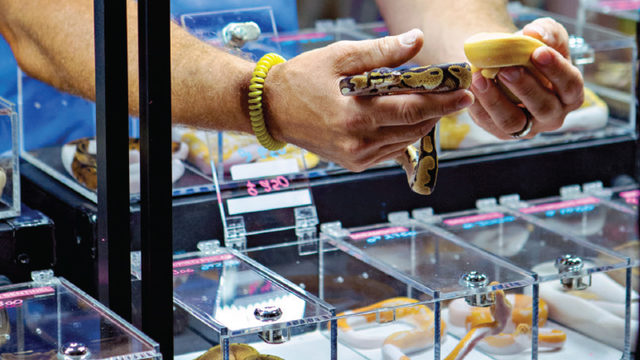 A drive to educate the public about little-known or maligned reptiles and amphibians is what inspired McVeigh to start MAHS. Nine years later, he’s still recruiting experts to speak at monthly meetings held at McFarland City Hall, the Zilla Lab near Milwaukee and on the Fox Valley Technical College Campus in Appleton. He then livestreams the meetings on Facebook.

About 40 of MAHS’ 200 members regularly volunteer to bring their animals to scores of schools, libraries, pet stores and public events every year.

“There are other herp societies that are bigger and older,” McVeigh says, specifically citing the Chicago and Minnesota herpetological societies. “But we do so much outreach compared to any other one.”

Amphibian and Reptile Enthusiasts Which Exotic Pet is Right For You? The Abandoned and The Illegal My Pet Project

Joel Patenaude, associate editor of Madison Magazine, has long harbored an interest in reptiles. Allergic to feathers and fur like other members of his family, Patenaude’s first pets had to be the frogs, snakes and turtles he could catch along the banks of Stewart Lake in Mount Horeb where he grew up. He cared for none longer than King Adrock — a Florida kingsnake he owned for more than 20 years before it died in 2017. 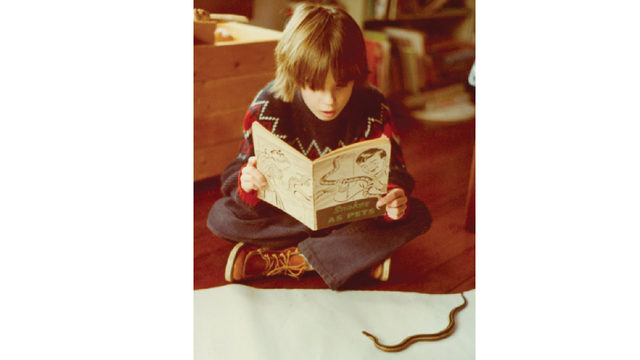 Patenaude has purchased reptiles from Richard Allen at Reptile Rapture and Paul Zuelke (both sources for this story) and is an active member of the Madison Area Herpetological Society.

Manning tables for MAHS, Patenaude has often seen children quick to approach the reptiles on display — if they’re not steered clear by an anxious parent first. “That, more than anything, makes me suspect that the fear of snakes and other reptiles is learned, not innate, behavior,” Patenaude says.