MADISON, Wis. — A man accused of killing a University of Wisconsin-Madison student who was walking in downtown Madison Saturday night had a blood-alcohol concentration of .146 percent, according to court documents.

Kong Vang, 32, of Madison, was in Dane County Court Thursday for an initial hearing on charges of hitting and killing a 24-year-old Wenxin Huai, of Madison.

Huai died after the SUV Vang was driving at about 7:30 p.m. Saturday struck her as she was walking on the sidewalk in the 400 block of South Park Street.

According to a criminal complaint, Vang accelerated as he was turning left onto South Park Street from West Washington Avenue and hit Huai and another person.

Officers found Vang unconscious and smelling of alcohol in his SUV, which was on the sidewalk and crashed into a utility pole, officials said in the complaint. An officer also found .5 grams of methamphetamine in Vang’s coat at the hospital.

The Dane County medical examiner said Huai died as a result of injuries she suffered when she was struck by the SUV.

The Chinese Student and Scholars Association held a silent protest in front of the Public Safety Building during Vang’s initial appearance Thursday. They want lawmakers to review OWI laws in the state.

“We want to have a place, a future place, that is safe for everyone. We hope the Legislature can help to provide legislation that can provide a better environment,” said Terry Tao, adviser of the association. “Maybe someone really needs to look at those cases and stats. If there are issues maybe we need a fix to help everyone living in this state have a better life.” 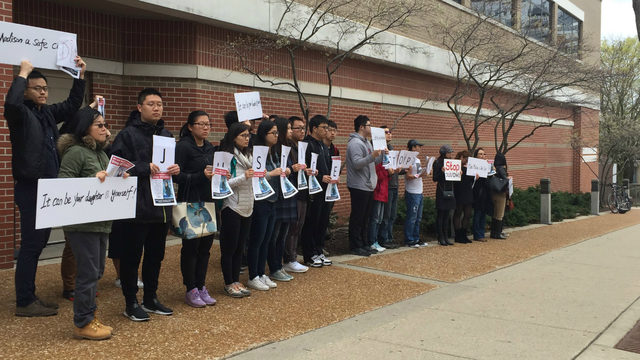 A statement from UW officials said Huai came to Madison in 2015 from Bejing, where she graduated from Peking University. She was studying economics and working as a research assistant in the Traffic Operations and Safety Laboratory.

She was expected to receive her master’s degree in economics next month.

Car rolls over, traps man inside for hours

Gov. Evers calls for special session on farm bills, talks plans for executive orders in State of the State address

Sheriff: Man fatally shot by police linked to other crimes

Cross: UW regents will seek tuition increase in next budget