Bail set at $250K for man accused in killing

MADISON, Wis. — Blood found in the kitchen of the apartment where police say a Madison man was stabbed to death matched the DNA of the man accused in the homicide, according to a criminal complaint filed Monday in Dane County Court.

Darrick E. Anderson, 23, was arrested on suspicion of a retail theft at East Towne Mall around 5 p.m. Tuesday and was a person of interest in the slaying of 46-year-old Andrew G. Nesbitt. Anderson was in court Monday, when a charge of felony first-degree intentional homicide was added to theft charges. 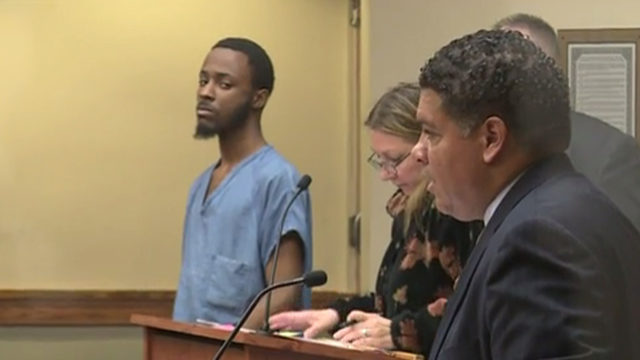 Nesbitt was found dead March 27 in a Madison apartment after Dane County dispatchers got an emergency call just before 4 p.m. from 27 N. Butler St.

According to the criminal complaint, blood evidence collected at Nesbitt’s apartment matched Anderson’s DNA. When Anderson was arrested in the retail theft from Gordmans Tuesday, about 24 hours after Nesbitt was found dead, he had cut wounds on the insides of both palms. Anderson’s right hand was bandaged when police arrested him, and the wounds on that hand had been sutured.

On Monday, six days after his arrest, Anderson stood silent in court, and the court entered a not-guilty plea on the misdemeanor counts of theft, bail jumping and resisting an officer on Anderson’s behalf, according to court records. Cash bond was set at $250,000, and Anderson was ordered not to have contact with witnesses, not to possess weapons, consume alcohol or use or possess controlled substances.

According to the criminal complaint, defensive cut wounds were found on Nesbitt’s hands. The doctor performing the autopsy said his cause of death was multiple sharp force injuries to the head, neck, torso and extremities.

Madison police Chief Mike Koval said that Nesbitt and Anderson didn’t know each other. He said they had a chance encounter on the street several blocks from where Nesbitt was killed. Surveillance video from a taxi service appeared to show Nesbitt and Anderson interacting.

According to the criminal complaint, video from the Kelly Williamson Mobil station, 636 W. Washington Ave., about 3:40 a.m. showed Anderson and Nesbitt at the store at the same time. Police were able to use city cameras to also track the movements of two men matching their descriptions from the time Nesbitt left the gas station until about 4:20 a.m. Monday near State Street and Mifflin. The criminal complaint said Nesbitt is seen walking on Mifflin Street east, in the direction of his apartment. A person matching Anderson’s description is seen walking slowly behind Nesbitt on the video, police said.

Police said there was no forced entry into Nesbitt’s apartment.

Nesbitt’s roommate was out of town for the weekend and returned to find Nesbitt dead in the 24-unit apartment complex, police said.

Anderson’s next court appearance is scheduled at 1:30 p.m. April 11.