MADISON, Wis. — The brother of a girl who was nearly struck by gunfire in her west Madison home last month thanked the officer who responded to the call.

On April 24 the 6-year-old was in her apartment at about 8:30 p.m. in the 5800 block of Russett Road when a bullet came through a front bay window. The round was among several shots that were fired outside the girl’s home, according to the report. No one was injured, but Madison police Chief Mike Koval called the night a “horribly compelling night of crime,” in which police responded to seven firearm-related violence including the Russett Road incident.

In a news release Thursday, Officer Mike Love said he interviewed the family, who was home at the time of the shooting. Love said the boy, who is younger than his sister, was scared and asked what would happen if the shooters returned.

“I told him we would protect his family if that happened,” Love said in the release. “A short time later he came out of the bedroom with the note and gave it to me.”

In a child’s handwriting, the note reads, “thank you for saving my little sitter” and is signed “from Kameron to offser Love.” 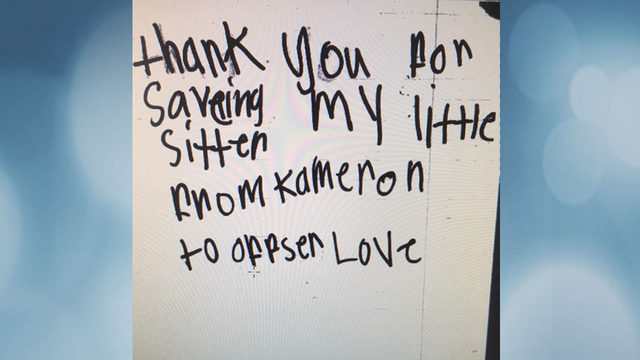