MADISON, Wis. — Nearly three months after first responders helped birth a breech baby, they were reunited with the newborn and family for a special dinner to celebrate their heroic work.

Ines Berna said her pregnancy with her newborn, Simon, was as normal as could be, so when her water broke after two hours of labor and she felt “what must have been the umbilical cord and a leg coming out,” she panicked and told her husband, Andrew, to call 911.

When Engine 10 and Medic 8 were dispatched to the Bernas’ home in the Lakeview Hills neighborhood, they had very little information. When they arrived at the scene, the crew was expecting a simple, routine “woman in labor” call, but they soon realized that was far from the case. 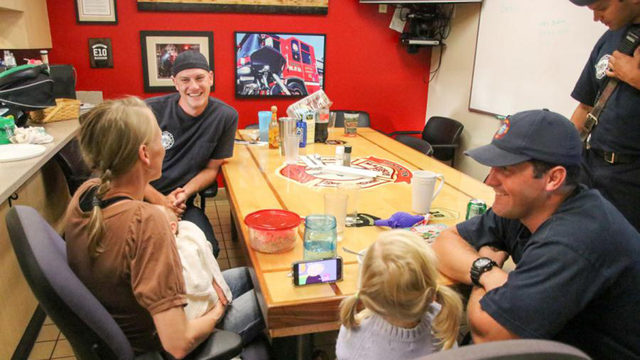 “Getting a childbirth is a once-in-a-career type of call,” said acting paramedic Lt. Jan Hesslink. “But a breech? With a delivery? That’s unheard of!”

Typically, protocol directs EMS providers to stop the advancement of breech deliveries so the mother can be taken to a hospital as soon as possible to ensure a safe delivery, but when EMTs Brian Tremain and Caluster Buie got to the scene, they realized the birth was inevitable, and they took action to deliver the baby. Medic 8 arrived on the scene shortly after and found Tremain and Buie helping Ines through the delivery.

“He came out easy for a breech baby,” paramedic Jonathan Braun said. 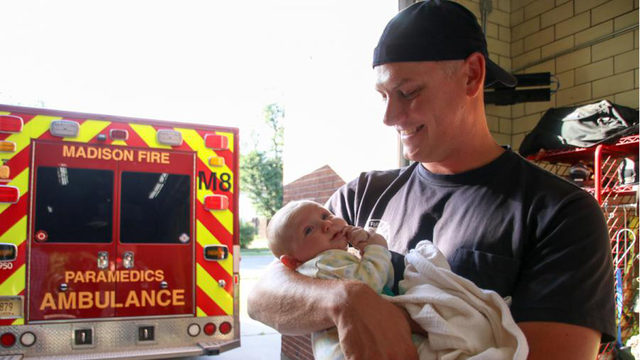 Despite having a pulse, Simon wasn’t breathing and was limp and gray. That’s when the responders from Engine 10 and Medic 8 began working to start his breathing. After suctioning his airway and using a bag-valve mask on Simon to prompt his lungs to start working on their own, he eventually began to cry — a sign that everything had turned out alright.

Three months after the fateful day, the Berna family visited Fire Station 10 with a specially cooked meal to thank the first responders for all of their work on the day of Simon’s birth. The responders also came prepared with a surprise for the Bernas: a special cake and a custom onesie and T-shirt with “M8 E10” on the back and the MFD emblem displayed on the front. 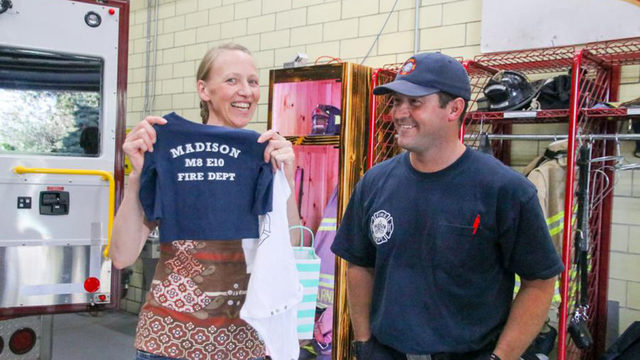