Local animal welfare officials have a reminder for pet owners: Don’t leave your pets unattended outside.

Twice in the past few weeks, there have been incidents in which dogs were tied to poles or trees. On Monday night, a dog was found tied to a tree behind a Pizza Hut in Germantown, Wisconsin, and a few weeks ago, a dog was tied up in front of a Madison grocery store and bit a passerby.

Animal welfare supervisor John Hausbeck, with Public Health Madison and Dane County, said when he got to the scene, the dog and the owner were gone.

“That situation didn’t have to happen. Now we have a person that has been bitten by a dog, has medical expenses and has the trauma that goes along with it,” Hausbeck said.

Carrie Donahue owns Full Circle Veterinary on Monroe Street, near where the incident happened, and said her neighbors are now paying more attention.

“It’s something that a lot of business owners on Monroe Street are starting to watch out for a bit more than they had in the past. (It’s) just because we’ve had some incidents here where dogs have been left out on the sidewalk tied up, while the owner is going into a store,” Donahue said. 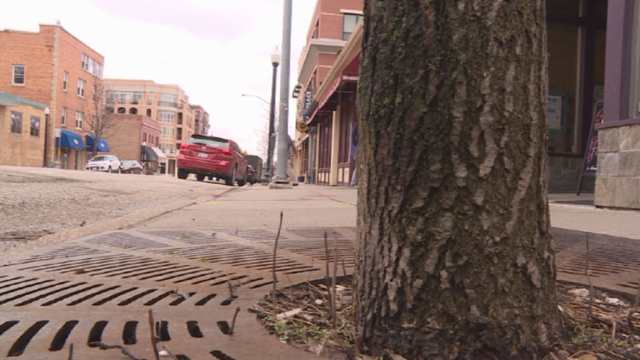 Hausbeck said the trend is illegal under state law, and wants it to stop.

“There is no acceptable time to leave your dog unattended. If you’re off your property, have your dog on a leash and keep that dog in your control,” Hausbeck said.

If a dog is found unattended in a public place, either tied up or running loose, the owner could be charged with a fine. Another possibility is the dog could be taken to the local animal shelter for fear of abandonment. The owner would then have to pick it up there, and pay more money to get the pet back.

Hausbeck recommends, before heading to the store, leave your pet at home or walk with a friend who can keep watch over your pet while you shop.

“We want to make sure the animal is safe and the people going by are also safe,” Hausbeck said.

He also said to make sure your pet is licensed and always wears a color with an identification tag.