MADISON, Wis. — Dr. Mwangi Vasser is quick to point out his many blessings.

A Milwaukee native, Vasser owns a barber shop in Georgia and serves as an associate minister. But after traveling and learning as much as he could, Vasser set his sights on the military, with hopes of becoming a military chaplain.

That hasn’t been possible because of a felony conviction from when he was 19, when he was arrested for selling what he says was $80 worth of cocaine.

“I pursued and persevered all these years. Why stop now? I’m not a bad person and any other man or woman that has been convicted are all not bad individuals. We just did something wrong at that particular time,” Vasser said.

Now 40, Vasser is getting a new chance to pursue his military dreams. He was one of four men pardoned by Wisconsin Gov. Tony Evers on Monday, the first acts of clemency in Wisconsin in nine years.

Evers pardoned Vasser, Eric Pizer, Kevin Sorenson and Steven Nichols at a ceremony that was closed to the media. The governor was acting on recommendations from the Pardon Advisory Board.

Pizer, 38, is a former Marine who was charged with battery at age 22 after he got in a bar fight while celebrating his return home from Iraq. For him, a pardon means a chance to pursue a career in law enforcement.

Sorenson, 36, was arrested for selling ecstasy at a party when he was 17. He’s since been a US Air Force civilian employee. For him, a pardon means a chance at additional military service opportunities, including volunteering for deployment.

Nichols, 62, was charged with felony burglary after breaking into a tavern to steal alcohol and cigarettes at 21. For him, a pardon means a chance to hunt and travel to Canada to participate in the Calgary Stampede.

At the ceremony Monday, Vasser presented Evers with a plaque to show his gratitude. 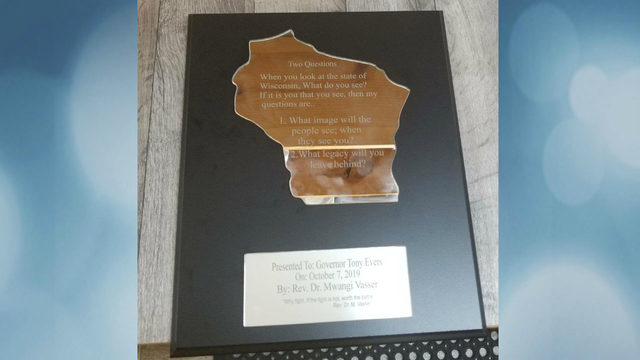 He said the reality of getting a pardon and what that would mean for him didn’t really sink in until he received the final email from the board.

“I was all over the place emotionally: crying, praising God first and foremost, mixed emotions. A little fear is there because it’s a new life beginning, you know?” Vasser said.

Former Gov. Scott Walker effectively shut down the pardon process in Wisconsin during his two terms in office. He did not appoint a pardon board and did not issue any pardons.

Under Evers’ administration, people convicted of a Wisconsin felony can apply for a pardon if they completed their sentence at least five years ago and have not committed any new crimes. People currently required to register on the sex offender registry are not eligible for pardons. ​​​​