8 dishes you need to eat now

The next big thing might be hidden in plain sight

These eight dishes are a reminder that the next big thing isn’t always the newest menu item, nor the food-hall-of-fame item. Sometimes it’s the dish that has been hidden in plain sight the whole time.

A cheese board isn’t a one-size-fits-all menu item. Instead, you create it yourself with the help of Fromagination’s cheesemongers. Owner Ken Monteleone and his team help customers put together gourmet experiences for at-home guests. “The beauty of cheese boards is that the cheesemakers have done all the work for us,” says Monteleone. But the cheese plate has evolved since its days as an expected platter of uniformly sliced meat, cheese and crackers at the average family gathering. Many cheese boards today are works of art, featuring varying textures, colors and flavors. Monteleone has often hosted dinner parties in which he offers guests first, second and third courses of thoughtfully presented cheeses and pairings. He might start with a triple cream cheese that acts as a palate cleanser, along with a mild goat cheese. For the second course, maybe an Alpine-style cheese. The main course might feature an aged Gouda — maybe one with a little spice in it — plus a bold aged cheddar. For dessert, he might consider Rogue River blue cheese, which is wrapped in syrah grape leaves and marinated in a pear brandy. “That is like the most decadent blue cheese that we have,” he says. 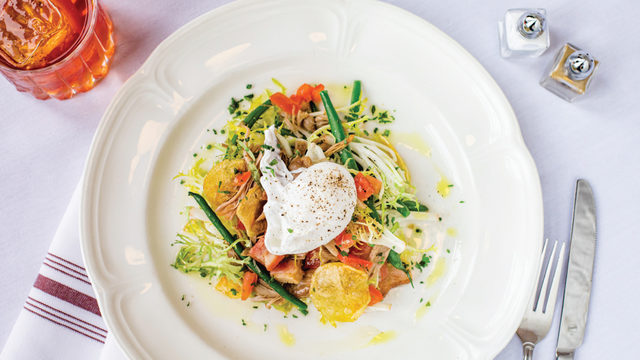 The French may have invented the Lyonnaise salad, but Sardine has perfected a version of it. At least we think so — we’re pretty sure any salad is made better by adding duck confit, house-made potato chips and a poached egg. Nothing against the purposefully low-calorie salads of the world, but this frisee aux lardons salad that’s tossed in a warm shallot bacon cider vinaigrette is not a placater for a dieting diner. Rather, it’s a celebration of the masterful results of balancing salt, fat and acid. John Gadau, who owns Sardine and Marigold Kitchen along with Phillip Hurley, developed the recipe based on a salad he learned to make while working under esteemed chef Michel Richard in California. Duck confit pulled off the bone is steeped in the bacon lardon vinaigrette before it’s incorporated with diced tomatoes, frisee lettuce and haricots verts (green beans). The crispy potato chips also get tossed in the vinaigrette to lightly soften them, but their crunch remains intact. Once plated, the colorful salad is crowned with a cracked pepper-dusted poached egg. It’s a salad so good that it makes the roster for both brunch and dinner. “It’s like a freshman being asked to play varsity — salads don’t often reach brunch caliber unless they are phenomenal,” Gadau says. 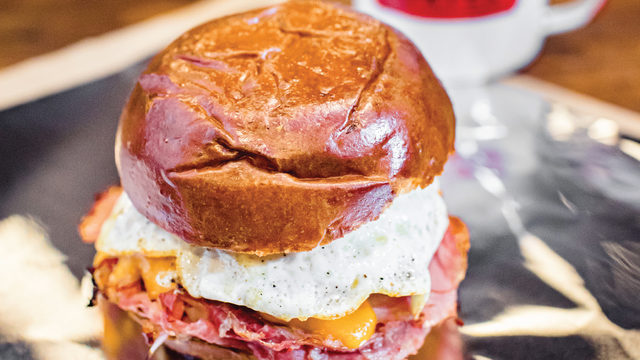 Building Bandit
While a stand-alone restaurant and market are no longer in the cards, Gil Altschul’s plan for a new venture in the train depot on West Washington Avenue is back on track. Construction has started to enclose the train platform space with glass that will expand the dining space of Porter, Altschul’s coffee shop, by 60 to 70 seats. Porter will remain open seven days a week but in the evening will transition into Bandit Tacos, which will offer fresh-milled corn tortillas made on-site, chips and guacamole, margaritas, horchata and other Latin classics.

It took Alton Brown tweeting about this breakfast sandwich for us to notice it. But now that the Food Network personality has said it, we can’t unhear it: Porter Coffee makes “quite possibly the best breakfast sandwich … ever.” Gil Altschul says this standard grab-and-go coffee shop offering was not created to become a darling of Madison’s breakfast options. He developed this sandwich — composed of 3.5 ounces of Heritage Farms ham, stone-ground mustard, thinly shaved red onions, an over-medium egg and Hook’s cheddar on a Stalzy’s Deli hybrid brioche/challah roll made only for Porter and Heritage Tavern — because, well, people expect a breakfast sandwich on a coffee shop’s food menu. But this morning staple proves that even the most obvious, simple, expected menu item can be absolute perfection. Especially when it comes double wrapped in aluminum foil and butcher paper that’s held together by a cargo tag sticker almost too cute to tear. 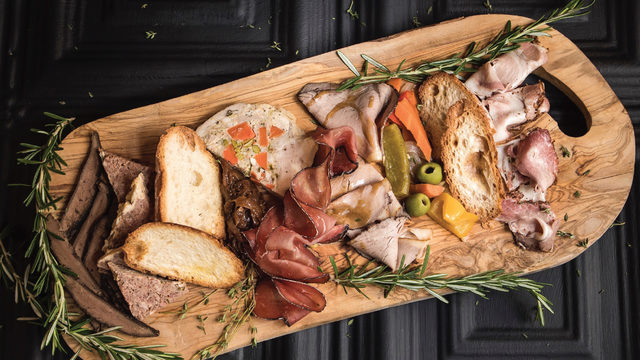 Curing meats in-house is time-consuming. It’s not something you can improvise. Very few restaurants do it. But Francesco Mangano can’t imagine not doing it himself. “It’s a part of Italian cooking — it’s a big part of the heritage,” says the owner and chef of Madison’s Osteria Papavero. In 2008, his restaurant was the first in Wisconsin to be approved to make salumi inside a restaurant, and they created a model that the health inspector started using for all other downtown restaurants. Mangano, who grew up in northern Italy, is known for creating adventurous offerings at Osteria Papavero over the past 13 years — evident in the constantly changing daily specials board — but the salumi platter showcases just how brave Mangano is. The shareable board’s contents are always rotating and might include pastrami, sausage, duck liver pâté and terrine or salami and bresaola made of elk, venison, goat, lamb and pork, to name a few. He ages and smokes many different meats and often adds root vegetables to his sausages in the rustic Italian way. He learned the art of salumi making from two different butchers he apprenticed with in Tuscany and Mantua, which happens to be one of Madison’s sister cities. Mangano says he learns something new every time he prepares meat for his salumi board, and enjoys practicing the Italian methods. “We do believe in keeping those traditions alive, because eventually they will disappear,” Mangano says. 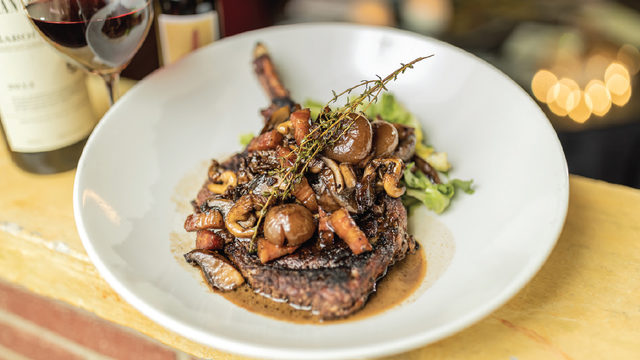 When Patrick O’Halloran and his business partner, Michael Banas, took over Lombardino’s about 19 years ago, their menu was simple — eight pasta dishes, a few sides and antipasti. “I was trying to do things simple, but very rooted in Italy,” O’Halloran says. But over the years, things have changed. Midwesterners enjoy eating seasonally, and Lombardino’s menu now changes six times a year. In the fall, the restaurant serves an 18-ounce rib-eye steak he says is a fan favorite. But the beauty of the dish is in the details — the steak is cooked over a hickory and oak wood fire-burning grill and is accompanied by seared escarole, Hidden Valley Mushroom Farm’s oyster mushrooms and Palm’s Mushroom Cellar’s cremini mushrooms. The mushrooms — one of those fall ingredients Midwestern chefs can’t wait to get their hands on every year — are sautéed with garlic, thyme, pancetta, cipollini onions and a fresh stock made from local veal bones. The mushrooms are then deglazed with Villa Manodori, a balsamic vinegar made famous in Modena by Italy’s Massimo Bottura, one of the world’s most well-known chefs. “That’s how we stay connected to one of the great Italian restaurants,” O’Halloran says of Bottura’s restaurant, Osteria Francescana. Some guests still resist O’Halloran’s modern take on classic Italian dishes. “I had a customer say, ‘This is not Italian food, but it’s floating in the same river.'” If O’Halloran continues to create inspired dishes such as this fall rib-eye, we’ll gladly float in that river. 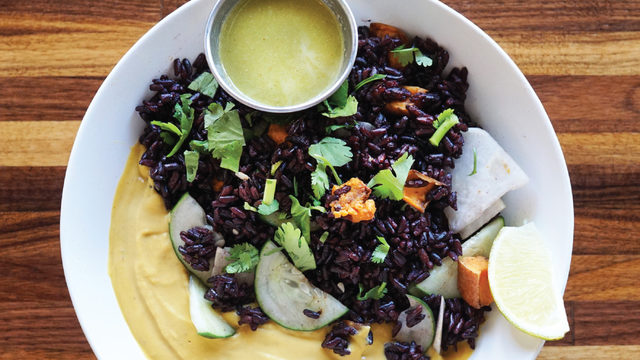 Forage Is Growing
This year was one of beginnings and endings for Forage Kitchen owners Doug Hamaker and Henry Aschauer. Earlier this year, the two decided to close Roast Public House, the first Madison restaurant they opened together on State Street in 2012. Now Hamaker and Aschauer have shifted focus to their Forage Kitchen venture, which started with one location on State Street in 2015. The second location opened in spring 2019 in the Hilldale Shopping Center. In September, a third location opened in the Monona Riverfront Redevelopment Project, “The Current,” in Monona. And that doesn’t look like the end of Forage’s growth.

Forage Kitchen is doing so many things right. It picked up on the fast-casual trend before it even hit its peak. It branched out into making its own kombucha, which could very well be considered Madison’s official drink. It has created relationships with and supported local farmers. And it counts itself among dozens of local restaurants that source from Madison Sourdough by offering a chunk of bread to go along with its hearty grain and salad bowls, which are generously portioned, served quickly and reasonably priced. The Thai Bowl stands out on the menu, featuring black forbidden rice, radishes, sweet potatoes, cucumbers, Thai basil pesto dressing and a lime wedge. “It touches on so many flavor points — sweet, spicy, salty and has that comforting aspect from the Thai coconut curry sauce that goes really well with our hot black forbidden rice,” says Doug Hamaker, who owns Forage Kitchen along with Henry Aschauer. 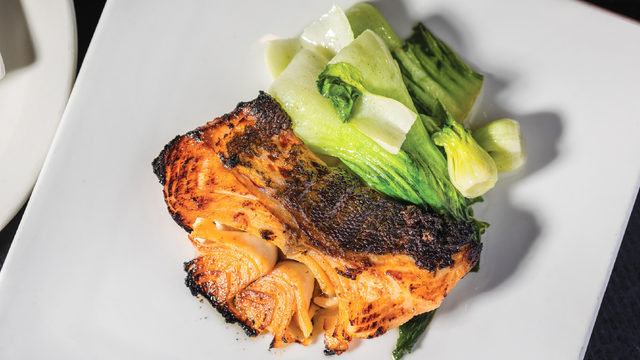 This dish has two components: black cod and bok choy. That’s it. When a dish is this good, it can stand alone. Shinji Muramoto has had black cod on the menu since he opened his first Muramoto restaurant in 2004. Can a 16-year-old menu item be the next big thing? We think so. This dish represents a return to simplicity. Chefs are often expected to constantly amaze and surprise with color, eccentric flavor combinations and Instagram-worthy presentations. What’s often lost is the exceptional beauty of a few ingredients prepared expertly. This black cod is marinated overnight in a mixture of miso, sugar and mirin, which helps balance any overly fishy flavor. It’s then broiled to order and served on a bed of sautéed bok choy. Miso black cod is a traditional dish in certain areas of Japan, especially the northern area where black cod is harvested, Muramoto says. “I’m from Sapporo, so my parents cooked it every once in a while when I was a kid,” Muramoto says. “Black cod is a delicious fish itself … moist, flaky, sweet and savory.” 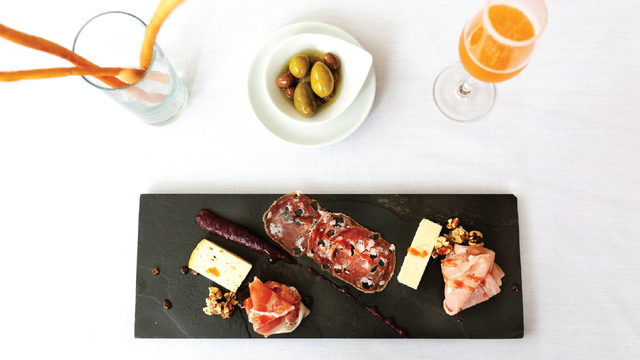 Tory Miller returned to the L’Etoile kitchen in mid-September after the departure of chef de cuisine Itaru Nagano and two other sous-chefs, and with him he brings a new approach to the tasting menus. “With me and my new culinary team, we’re going to make it more thematic,” Miller says. Each tasting menu will be inspired by a certain theme, be it a place, an ingredient or a technique. “We have all these themes that we want to do because we are all so passionate about all these different global cuisine styles,” he says. The themes will be wide-ranging, from Thailand to Spain to Wisconsin supper club. The first themed menu launched Sept. 25, spotlighting Piedmont, a region in northwest Italy. The most recent tasting menu, which runs through Nov. 20, has a “Native Wisconsin” theme that incorporates food items that originated in Wisconsin, including maize, wheat, ginseng, wild berries, pheasant, venison, hickory nuts and sumac, prepared in L’Etoile’s modern style.