WEST POINT, Wis. — One person was injured and a home was leveled in an explosion Tuesday morning in Columbia County, an official said.

Columbia County Sheriff Dennis Richards said in a news release Tuesday afternoon that a new single-family home was under construction reportedly exploded on Chrisler Road in the town of West Point, near Lodi. The house was destroyed and portions of the debris caught fire.

A Lodi fire official said the house had been framed, the furnace was connected and functioning, and crews were working on drywall when they smelled gas.

According to the Columbia County Sheriff’s Office, the workers smelled gas and stopped working on the house around 8 a.m. The house was ventilated.

“Obviously, that is a pretty strong indicator. That if there was an odor of gas and they were concerned enough about it to air it out, that’s obviously the first place we will look.,” said Lt. Wayne Smith, Columbia County Sheriff’s Office.

The Lodi Fire Chief said there was likely a leak.

Building permits for the property were issued in August. The furnace was connected and contractors were in the process of installing dry wall, according to the fire department. BayBrookes Heating & Cooling is listed as one of the contractors on the building permit. The company declined to comment on the explosion.

Per FD: The smell of gas caused workers to stop work on the house under construction around 8. House exploded at 9:49 #news3 pic.twitter.com/7dUPmwQDN3

The heating contractor who came to investigate the smell was injured, a fire official said. The contractor was taken to UW Hospital, Richards said.

The Columbia County Sheriff Office and Lodi Fire Department will investigate the cause and origin of the explosion. 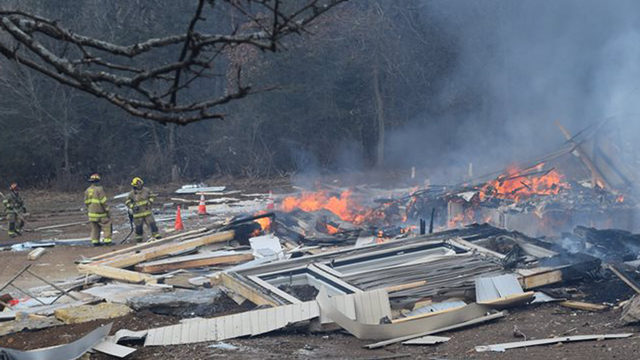